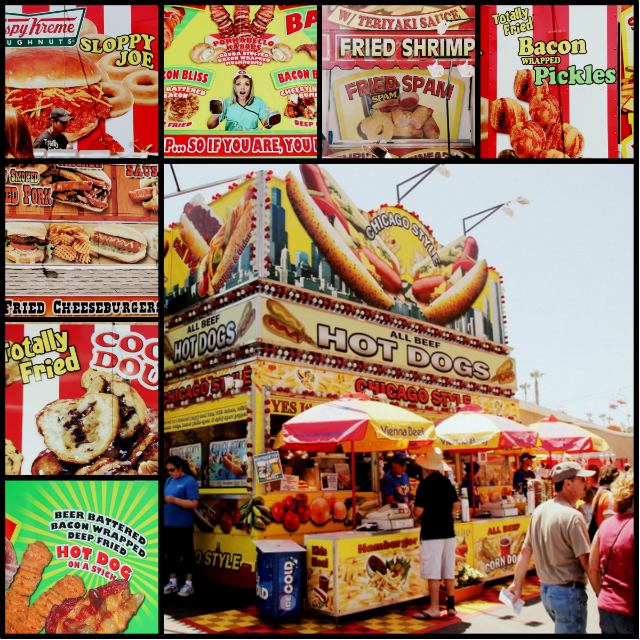 So when Acadia heard that I was within driving distance of the San Diego County Fair and that they would be upping the ludicrous fried food ante this year with a Krispy Kreme Sloppy Joe Donut Sandwich, the badgering to go take pictures for the Gallery began.  Now, I’m an adventurous kind of ghoul, but I don’t honestly see the appeal of bacon-flavored root beer or deep-fried cookie dough. Also, I don’t generally like people who aren’t me, and as one of the largest fairs in North America, the San Diego County Fair is expecting nearly 2 million of them this year.

However, Acadia was smart enough to point out that this would save me from digging up an excuse to post about half-naked celebutards this week, and I AM terribly, terribly lazy, so to the fair I went.  Click through for all the ridiculous fair food (I believe the theme this year was “How many ways can you put bacon into your body?”), livestock, games, crafts, and rides that the San Diego Fair has to offer.

If you’ve never been to a big county fair, it is an astonishingly random mish-mash of FFA kids with their prize goats, baking contests, flower shows, fried food, miscellaneous vendors, beauty pageants, and rattly rides slapped together by bored roadies.  The San Diego County Fair is like that, but on a ridiculous scale (although without the beauty pageant these days – probably because they realized they weren’t going to do any better than when a young Raquel Welch took “Fairest of the Fair” back in 1958). 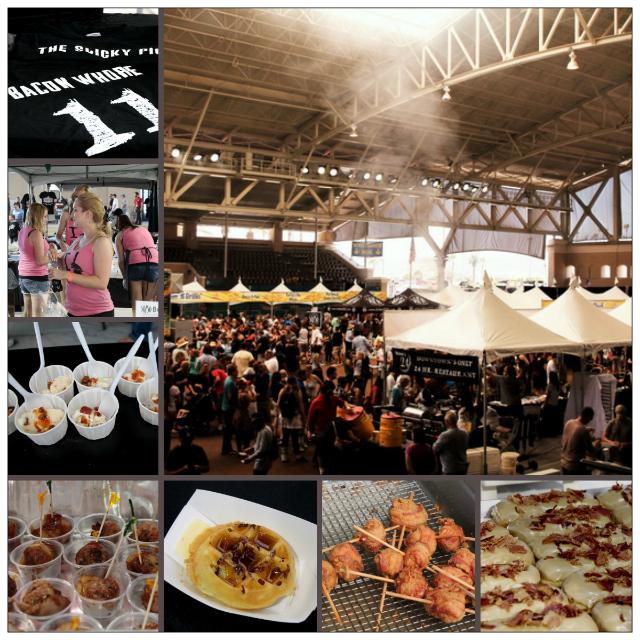 But- let’s be honest – the reason the fair makes the national news every year is the food: frozen, buttered, battered, breaded and fried and – this year – wrapped in bacon to boot. While I did not see the Kookie Cookie this year (a fried chicken patty sandwiched between two cookies), or the battered and deep-fried White Castle sliders, there were plenty of deep-fried Snickers, Oreos, and Klondike bars to be found.  Hurling themselves hard at the trend for all things bacon, food booths throughout the fair also sold chocolate covered bacon, chicken-fried bacon, beer-battered bacon, deep-fried bacon cheeseburgers, bacon ice cream, bacon cotton candy, bacon-wrapped deep-fried pickles, and, as a healthier (?) option, a two-pound turkey leg wrapped in a pound of bacon.

Totally unrelated, but did you see that the American Medical Association just classified obesity as a disease?

ANYWAY, back on topic: Click through the gallery below for more pictures from this year’s San Diego County Fair.  I particularly like the old lady rocking a jigsaw, the proudly labeled AUTHENTIC Michael Jackson Neverland ride, and the prize-winning, über-geeky World of Warcraft woodcarving.  And if you do find yourself in the general vicinity of southern California (or in need of an industrial-sized supply of cooking grease), you can find more information on attending the fair here.