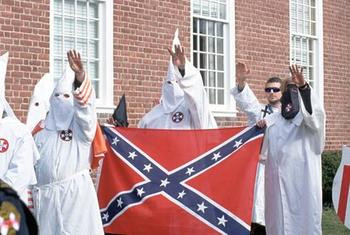 EDIT:  People seem to be confused. I support everyone’s right to fly the Confederate flag.  You are just a racist if you actually do it.

If you find yourself talking to a conservative (there are many debating the “issues”, but some are smart enough to leave it alone) who is trying to tell you that the Charleston white supremacy murders and the racist Confederate flag flying over the South Carolina courthouse issue are “nuanced” and that people have a “right to their beliefs” and they should be “discussed in a larger context” just call them a racist and stop talking to them.

Why?  Because liberals have this Achilles heel where they try to legitimately debate issues that are not up for debate.  They offer respect to people and arguments who deserve none, and they seem to forget that conservatives who are suddenly so thoughtful and willing to “dig deeper” to get at root problems have no issue shutting discussions down when it is something they want.

See?  They pride themselves on snap judgements and not “flip flopping” and “standing up for their beliefs” when it is something they want but if it is the Confederate flag they go all Socrates.  Over the past 24 hours I have heard the following:

What?  Look at those statements.  People who say those things go in one of three boxes: 1:  Racist  2: Idiot  3:  Racist idiot.  But liberals keep trying to debate.  They keep trying to be respectful.  And when someone does finally call someone a racist then the racist then declares that they have won the debate.  “Anyone who resorts to name calling has no valid arguments.”  Unless you are calling someone a Muslim or a traitor or a Communist.

Calling racists racists is the argument.  Shut the discussion down.  Gang up on them.  Bully them.  Shut them up.  And before someone starts telling me I am a hypocrite because I am telling people to do the same thing I am complaining about, check yourself.  I am not complaining about what conservatives do.  What they do works.  They managed to secede from the Union, keep black people segregated and oppressed for another 100 years, then get to keep their racist banner flying above the seat of state government for another 50 while making liberals think they have “made progress”.

Stop respecting people who don’t deserve respect.  You will not change a racist’s mind.  They cannot be won over with love.  You can only beat them into submission.  If you want something, take it.  I cannot for the life of me understand why the people of South Carolina have not yet gone to the capitol and cut the flag pole down.  Petitions won’t do anything.  If you want to beat a bully, punch him in the mouth.

Liberals need to stop being pussies.  Put your balls on and tell all the hillbilly philosophers to shut up and get out of your way while you are on your way to get the Rebel flag off the capitol of one of the UNITED states.  Seriously.  Enough is enough.