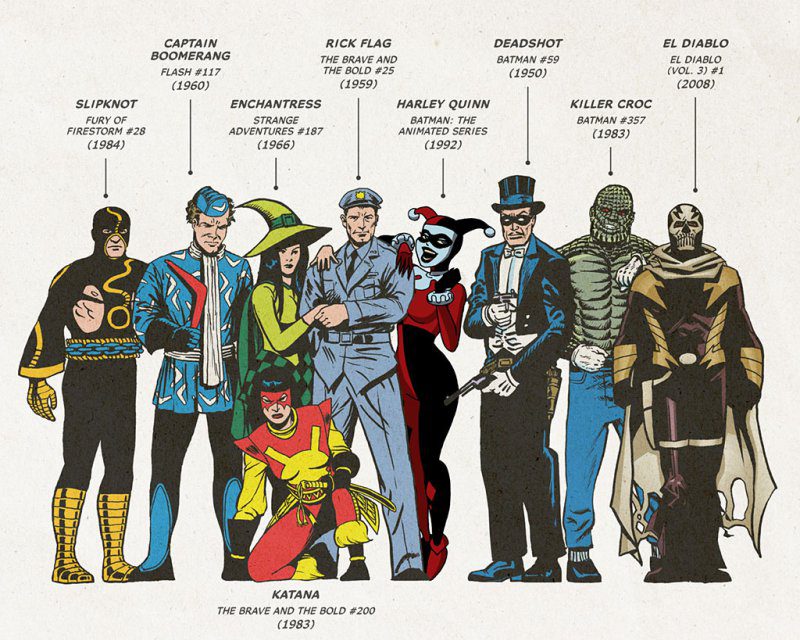 TL; DR = Go see Suicide Squad.  I think you will like it.  I did.  Never mind what the critics say.

So I have been excited to see Suicide Squad for a really long time, and I took this week off and was psyched that seeing the movie would be a part of my vacation.  Then I started seeing the news about how horrible it was and I was getting all wound up about it. Remember BvS and Sadfleck and blah de blah?  Well here it was all over again.  Then I saw news about how they actually made two versions of the movie and I really started to freak.  So I just stopped reading the reviews.  I don’t go to every movie that comes out anymore and I don’t choose to see something or not see something based on reviews.  But I do listen to people that I know because since I know them, I know how my tastes match up with them.  And every single one of my friends hated the new Ghostbusters but it got a 74% on Rotten Tomatoes which is what everyone is using as the reason to bash Suicide Squad with its crappy score of 27%.  So who knows, right?  I guess I should tell you what I think!

A few things before I start.  I say these things because since I don’t write a lot of movie reviews I thought it would be good to set the stage for where I am coming from.

So, here is the official Superficial Gallery spoiler filled synopsis.

Taking place after the events of Batman v Superman, US government agent Amanda Waller decides that in order to protect against potential metahuman threats she needs to get some bad guys together to be able to work for the USA.  So if they succeed in whatever mission they are on, yay.  And if they don’t they can get blamed for whatever trouble there was in the first place.  But it all falls apart on the first day when one of the team (the 6000 year old witch Enchantress who is possessing the body of Dr. June Moon played by Cara Delevigne) escapes because she bamboozled Rick Flag (the special forces boss of the team and June Moon’s bae), finds her brother who is a really tall warlock and decides to destroy the world.  The team heads to Midland City where the brother sister team has set up shop and eventually saves the day (not without cost) and the mid credit scene propels the story to Justice League.

Did I like it?  Yes I did.  Was it perfect?  No it wasn’t.  So here are some chunks of good and bad, all mixed together.

The Premise of Suicide Squad

Maybe it is because I don’t read the comics, but I can’t really figure out when the Suicide Squad would come in handy.  Even the peril of the movie, the world being destroyed by Enchantress, seems like it could have been handled by the regular, good guy heroes.  I mean, sure Waller probably wanted to cover up the fact that she was the one who got Enchantress all riled up in the first place, but if she hadn’t, why would they decide that getting a bunch of bad guys to fight her was the best plan.  This is not a beef with the movie.  In the movie it makes sense.  I mean in the comics.  Maybe someone who reads them can tell me what they do and why. 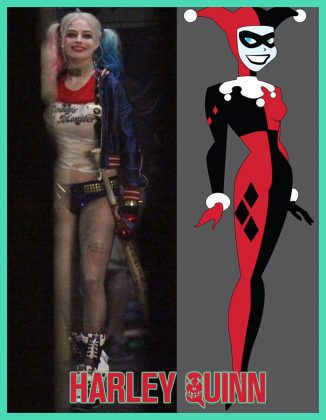 I wonder if we will see the original costume in a later movie.

Harley was fun and they showed her in the animated series costume at one point.  And when they were gearing up in the scene everyone has seen in every trailer she considers wearing it but decides against it (and against her hammer) but she looks good.  She doesn’t do the accent that I read people lamenting over but she does have her own style.  They show her orgin as Dr. Harleen Quinzel who is supposed to be curing Joker in Arkham Asylum but ends up falling in love with him.  She plays it crazy with something behind it.  She has one scene where she is seemingly pimped out to Common by the Joker but maybe they were setting Common up.  No idea.  But overall they obviously have plans for her as her character is fleshed out considerably.

So Harley becomes Harley after jumping into the vat of acid that made the Joker the Joker.  Actually, it is not one vat.  There are a bunch of them.  Why do they make it?  What else does it do? Why aren’t there lids on the vats?  Why was there no railing on the thing she jumped off?  Maybe if Amanda Waller wasn’t spending all our tax money on villain squads the government could fund OSHA. 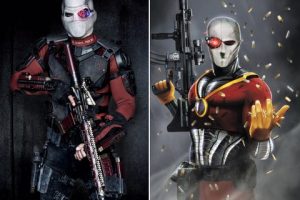 Will Smith plays Deadshot, who is the character with the most going on in the movie.  He is an assassin who has a daughter and who gets caught by Batman.  He makes a point of saying he doesn’t assassinate women or children and serves as sort of a sociopath with a heart of, if not gold, at least copper.  He only wears the mask once in the movie, which I guess makes sense because if you are paying for Will Smith you want to be able to see him.  He gets the majority of the jokes and delivers them well.  He and Harley have some chemistry but he is the first one who flips the script on something that still bugs me and I will have to watch the move again to figure it out. 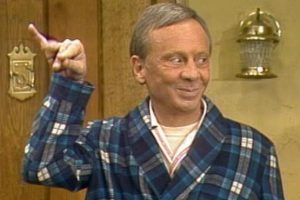 People who are old like me will totally get this.

Basically, Rick Flag has a phone app that will blow up the Squad’s heads if they disobey.  He blows up Slipknot (he was good at climbing up things, which is really stupid – they could have had him be good at tying people up, too and called him Mister Roper.  Anyway, Flag has to push a button on the app to blow up the person’s head.  No PIN number on that thing or anything.  Butt dialing would be deadly on that team.  But if he is, oh, I dunno, dead, then he can’t push any buttons.

So the squad is fighting the weird minions of Enchantress (real people turned into bumply monsters) and a bunch of the minions grab Flag and start to drag him away.  Harley says good.  But Deadshot says: if he dies, we die!  How is that a thing?  I don’t remember them saying it at any point.  So what the hell?  It changed the whole course of the movie and I still for the life of me can’t figure out when or why it happened.

Airing of Trailer Grievances and other Movie Making Stuff

It is a well-established fact that everyone is sick of studios putting too much of the movie in the trailer. Now, they hid the fact that Enchantress was the big bad so good on them, but a lot of the fun jokes got a snicker at best in the theater I was in since they had been hearing the same jokes for literally a year.  But what I didn’t expect that there would be seemingly important scenes from the trailers that were not even in the movie.  Remember when everyone was wondering about why the Joker’s face was burned on one side in one scene?  Well, keep wondering!  Jared Leto says a lot of his scenes were taken out, and just based on that I can believe it.  The bar scene was great, but there were parts of that in the trailer that were not in the final cut.  Same with the fist bump Scott Eastwood did with some other army guy.  They went back and did reshoots.  So what the hell  got put in that made that stuff come out?  I will be anxiously awaiting the Directors Cut of this one.

And why did director David Ayer say that this was going to highlight what Batman seems like to the criminals from their point of view?  He was in one scene with Deadshot where he was all considerate (I don’t want to do this in front of your daughter) and then the scene where he fishes Harley out of the car.  Unless there is a bunch of stuff that wasn’t in the trailers OR in the movie, then Ayer was outright lying.  Unlessssss those scenes were in the Ayer cut that didn’t get used?  I guess we will find out at some point. 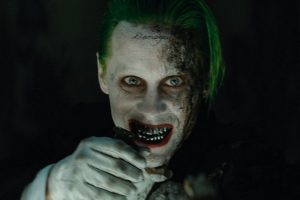 What happened to Mr. J’s face? Wait for the DVD to find out, I guess.

I like Leto’s Joker.  Not necessarily the grill or the tats, but they don’t bother me.  I think that he is placed in this movie so that he can be placed in the DCEU before the solo Batman movie.  We know from Suicide Squad that he escaped when Harley got caught.  And, according to Ayer, every tat has a story.  That story obviously didn’t get told in this movie (in truth, if you took the Joker out of the movie completely it would not have changed, really) but if he is telling the truth it will get told eventually.

Also the thing I like about this Joker is that he is skinny.  And the fact that his gang just wears random panda suits and batman masks and big eyeballs is awesome.  He is more of a mob boss than anything else and if he is the big bad in the solo Batman movie then I can see it becoming a pretty good detective story as opposed to just the standard punch up.  I hope that’s what it is, anyway.

I’ll see it again.  I need to see if Harley’s baseball card at the beginning when they were introducing everyone (except lame Slipknot) really said that SHE killed Robin.  If so, when?  I NEED TO KNOW!  Go see the movie, and then tell me what you think in the comments.