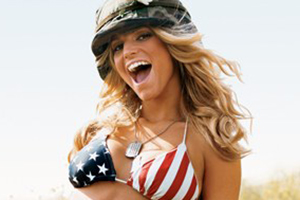 Jessica Simpson did a GQ shoot in 2005 at the height of her powers.  I still don’t think there is a more American thing than that photoshoot.  And if we have to take a break at the gallery to do some things, having her near the top of the stack is not a bad idea at all.

So while we will still be doing tongue updates, we will be holding off on new posts for a good chunk of the summer, for the most part, anyway.  The staff all has lyme disease, I think.  And I got some biiig stuff goin’ on.  Here is a video that will explain what I mean.

So check back in a few weeks, or sign up for email updates and let us come to you.  And while you wait, take a gander at 2005 Jessica Simpson.  Not that 2017 Jessica Simpson is anything to sneeze at, but in 2005 she could have probably won the war in Afghanistan for us.  Wait, we are still at war in Afghanistan.  Holy crap.  COME ON PEOPLE! Just get it over with.  Sometimes war is like soccer.  There can be a tie.  ugh.

Follow me on Twitter if you want.  Lots happening on Twitter.  Oh yeah.  Probably be talking about Jessica Simpson.  She’s probably not trending.  These pics should be, though.  Happy Fourth of July!