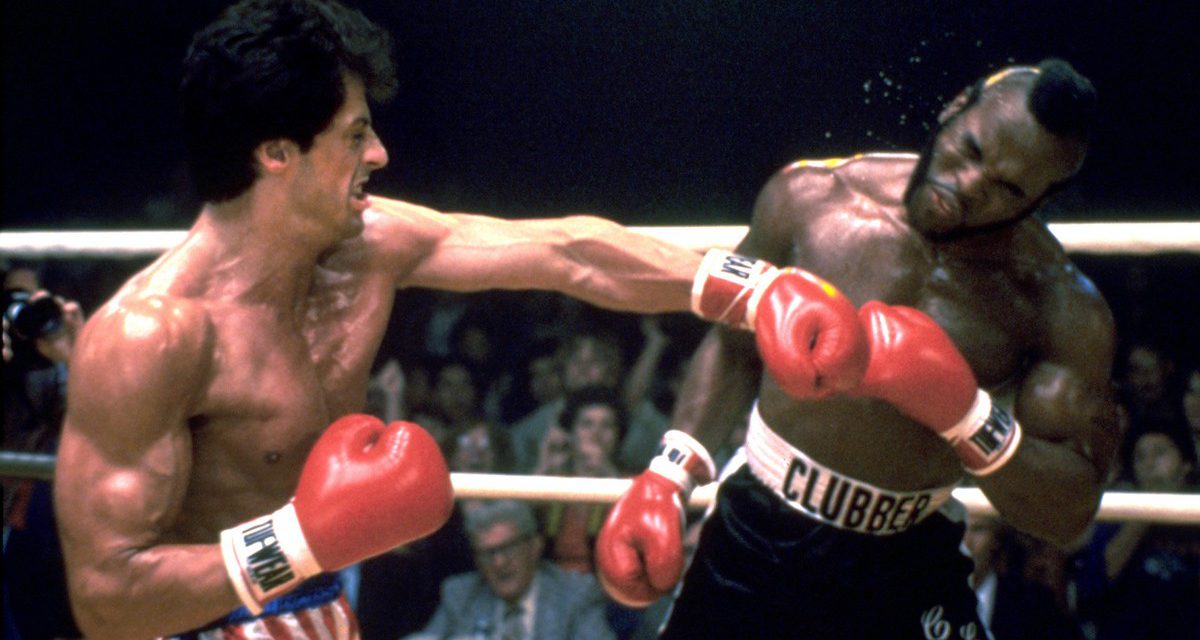 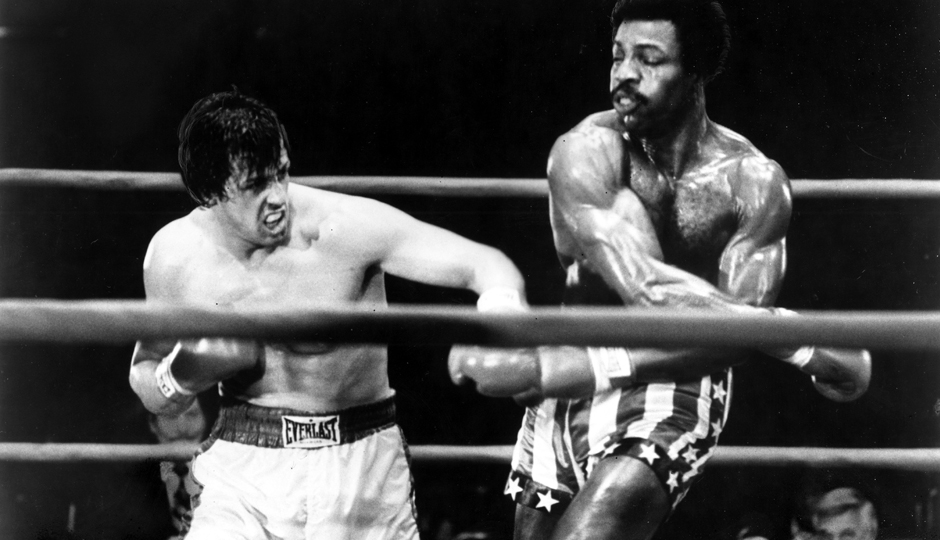 The Super Bowl Kicks off at 6:30pm this Sunday. Did you know that NBC has over 5 hours of nonsense to preview the game? Then, if you add in the Kitten Bowl kicking off on the Hallmark Channel at noon? WOW, Patriots fans have a full day of boredom ahead of them.

Why did I only mention the Patriot fans? Great question. Patriots fans are nerds. Listen to Patriots fans talk. They aren’t excited for the Super Bowl. And, OK, they’ll say, we have a dozen of them. Their season started two weeks ago, and all that.

Meanwhile, Eagles fans are out there taking nothing for granted, getting lit, throwin’ what they’ve got to throw at random people just trying to enjoy some football festivities.

What to do instead? Well, if we’re being real, a lot of Philadelphians are going to stand in the cold of their garages and pound Bud-Heavy or the Banquet Beer, listening to Eskin and Cataldi on some little portable AM/FM. And, every now and then shout out “GO BIRDS!”

For most Eagles fans, they’re going to try their best to contain their nerves. Lots of pacing. Lots of random clapping.

This is the guide for those Bird fans.

HOW TO PROPERLY BINGE ROCKY FOR THE SUPER BOWL

First, let’s get this out of the way: this ain’t a ranking of the films. Some of the Rocky movies you don’t want to watch on gameday. We’ll cover that. This is the sequence in which the films should be watched to kill the 8 hours before the big game. The goal of this sequence is to create peak hype come 6:30p.m.

And, to start it off, wake up, toss in Rocky III. 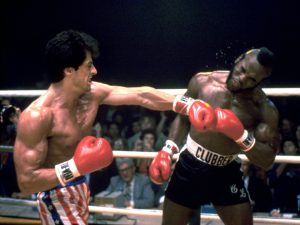 Why are we leading off with Rocky III? Rocky III is the most fun of the Rocky movies from beginning to end. I could talk this movie up and down, Mickey’s death, Apollo and Rocky on the beach, Eye of the Tiger, Mr. T of course. This movie packs a lot in for one of the shorter Rocky movies. Whereas the first Rocky will catch heat for being a slower movie, more on that in a second, none of that criticism exists here. This movie is what took the franchise from “film” to Blockbuster.

But, here’s why you’re turning it on to start the day: obviously the comedy of Mr. T, but, also, it is the movie in the series that most propels you to another. I mean, the ending is a freeze-frame of Rocky/Apollo about to throw down as Eye of the Tiger rolls through. Yeah, I’m ready to go for the next.

And, by next, I mean Rocky. The first one. 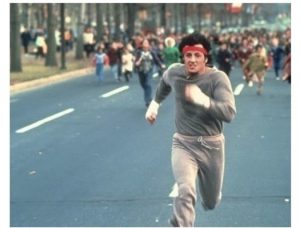 Look, this is the best film of the series. I get the arguments for Rocky 3 and Rocky IV. Of course. I have watched those movies way more than I have with the first one. 6 year old me watched a VHS with Rocky 3 and 4 taped on them on a damn loop. But, Rocky is the film that won Best Picture for a reason. In a deep year for the Academy Awards. (Seriously, Rocky beat out All the President’s Men, Network and Taxi Driver…)

It’s a story that is as rags-to-vergeofriches as they come. The great thing about Rocky, at this stage, was that it wasn’t a movie about Rocky doing some improbable s*** and reaching the absolute pinnacle of boxing. It was about Rocky wanting to prove that he could hang. You know that moment in your life where you still have these dreams of being the best at something you do? F*** that moment. This is about the moment after that moment. Where if you’re being honest with yourself, you ain’t ever going to live that other moment, but, you want to feel like you’re up in that air, if only for a fleeting beat.

And, that’s why this is the second movie you watch. Because Sunday’s moment for the Eagles ain’t about perseverance and redemption.

Let’s pause a second to talk about the movies not making this list. Spoiler Alert that is stating the obvious, Rocky Balboa and Rocky V aren’t on this list. Nor is Rocky II. Rocky II is a movie that I enjoy every time I watch it these days because I go in with low expectations. It’s out because of time concerns, and because it covers a lot of similar ground to Rocky. Rocky Balboa is out because of the two new Rocky films, it’s clearly below Creed.

Rocky V…oh boy. Yeah, Rocky V is terrible. Here’s the thing, though…if you’re a Philly Guy, keep this one on deck after the binge. After the Birds win the Super Bowl, watch the celebrations, and as you fall asleep on the couch giving no care whatsoever to whether the cig dangling from your lips drops to the floor and lights fire to your row house, hit play on Rocky V, and turn the volume up, and hope that you wake up for the cheesy street fight. Because that’s Philly Trash right there, and when you’re sleeping off one of the biggest moments in the history of the town, Philly trash is kind of the top of the damn World.

But, back to the hype binge.

And, the third movie, you’re runnin’ with Creed. 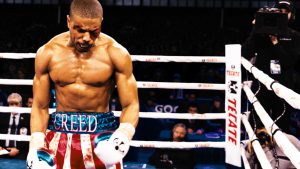 Do I think that Creed is the best movie in the Rocky Franchise? I do.

Why watch Creed third? It’s kind of like the whole bat your best overall hitter third in a baseball lineup thing, right? I mean, look, by this time of day, Super Bowl Sunday, hey, it’s tough to watch four movies straight. Those first couple you’re likely tossing them on, going in and out, making sure things are ready to go for the Super Bowl party, whatever. Now, you just want to get into that moment where you can just relax.

So, Creed, just enjoy it.

Also: best boxing entrance music of all time for the fight in this one. That Creed slow walk with Rocky being Rocky and not making sense, rolling into…Hail Mary in a hostile ground…yeah, it’s on. And, Conlan’s entrance is what millenials would refer to as fire. Literally, too.

If I was rich the first thing I would do is hire a guy to blow fire into the air dramatically before I enter a room.

And, finally, you’re about 90 minutes from kickoff, people are spilling into the House. They’re looking forward to that NBC pre-game, although everyone’s a little sad it won’t involve Bob Costas. But, you know what, yo, it’s Rocky IV time. 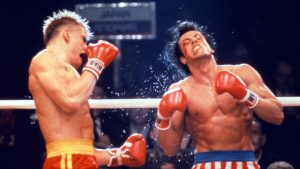 Rocky IV has to lead you into kickoff. This was an obvious selection.

Here’s the thing everyone knows about Rocky IV: it ended communism. We all know that. Sometimes we ignore the details in this partisan politics world in which we live. Like, everyone remembers that speech. Reagan: Mr Gorbachev, tear down this wall.

Everyone remembers that. But, sometimes we forget what came first. Reagan, big Cold War movie guy. Some historians say he told everyone he came in contact with: You’ve got to see Red Dawn. Even more historians say he told everyone he was amazed about how simple things unfolded in War Games. No one has seen The Hunt for Red October more than Reagan. And, while we remember clearly those four words from June 12, 1987, we forget the words that came before them: As I flew over here on Air Force One, we screened Rocky IV. It made me think.

See, Rocky IV will have you ready to run through a goddamned wall.

Because of Rocky IV, Reagan tore a damn wall down.

He was that hype.