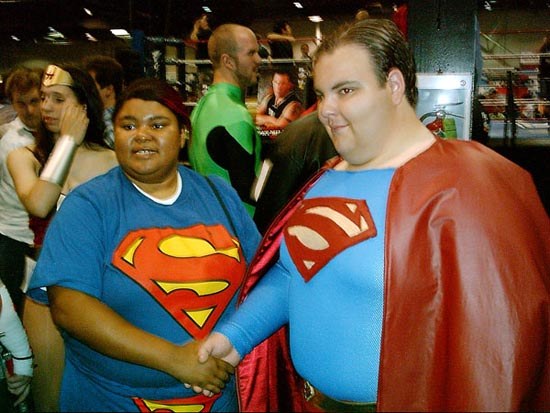 Saturdays are for clicking links.  So click these and be amazed and/or amused.  Do as I say.  This instant.

nostalgic and hammer it right into the ground.  The folks at Laser Portraits did this.  I never had a laser portrait, nor do know why they are so funny.  But what the hell.  It means something to someone!

All my school pictures had plain backgrounds.  Now that I think more about it, I sort of got gypped.  Why couldn’t I have been on the deck of a pirate ship, or choking Hitler?  School pictures should be more fun.

Screw Lasers.  Let’s get some pics going that have Mount Olympus or make it look like the kid is addressing the UN.  That may be the closest little Todd ever gets to success.

So I was on Twitter yesterday, Twitting, and I saw someone whoring this site called nasmap.  What does nasmap stand for?  Nothing as far as I can tell.  You sign up, you click on a piece of land (it seems like they based in on the old Sim City for Nintendo).  Then you upload a picture and then you wonder why you did all that.  I am still wondering.  They have no about us page.  No FAQ page, no text on the home page, no nothing.  So everyone go get a house near me or something I guess.  I don’t know why, but if they ever figure it out we will already be established and can shit on the n00bs.

I don’t think I can give a more ringing endorsement of this link than was given by bustedstr8 from the Batcave when he said:  This is pretty cool. I just spent about an hour playing with this…that sounded a lot less loserish in my head.

I don’t agree with the politics behind it, but it is an interesting snapshot of how the federal budget is allocated.

More Links after the jump!  Twitter Whoring at it’s finest!

Two years ago, Will was sitting in his office chair wondering if he was going to get a chance to touch my boobs.

Did Will get a chance to handle the goods?  Did he perhaps motorboat her?  Find out by clicking!

Got a hankerin’ to read a site that includes recipes, ghosts and something called NaNoWriMo?  I sure did.  That’s why I headed over to the Inner Bean after meeting her on Twitter.  I still don’t know what NaNoWriMo is, but I did like her post about Ghost Hunters.  Check it out.

Gotta be honest.  Didn’t think I was gonna find myself linking a knitting blog.  But life is pretty complicated sometimes.  I don’t know how to knit, but I realize that is because I have never tried.  I would probably be awesome at it, but I am a little afraid that my GIANT HANDS would make it difficult to hold the needles.  Speaking of knitting – here is something from Miragi’s site (she’s the witch, derh).  Does it sound like it could be dirty if you were really depsperate for something dirty?  “The picture makes the thread look way shinier than it actually is, and yet it’s got a lustrous sheen to it which will be absolute perfection for beadwork later on.”  Anything?  Yes?  No?  Ahhh, just go learn how to knit you hobbyless dinks.

This dude (or chick – they wouldn’t tell me) makes shirts and sells them.  The one in the pic over there is one where he takes how many people there are in the world and makes it a fraction where 1 is the numerator.  Shows you where you are in the world in a mathematical way.  Course, it is out of date now.  And now again.  And again.  Damn this world and its population!  Go buy some.  Or kill people until the number is right again.  Or do whatever the hell you want.  I’m not in charge of you.

This one took me a while to figure out.  Lots of good political posts, but then there are some recipes thrown in there, too.  I guess putting a recipe in every once in a while is good if you don’t have anything else to say….Take two slices of bread, add peanut butter to BOTH slices.  Put jelly on one side.  Put the pieces of bread together (make sure the sides with the peanut butter and jelly on them are the ones touching) then eat it. And also visit this site.