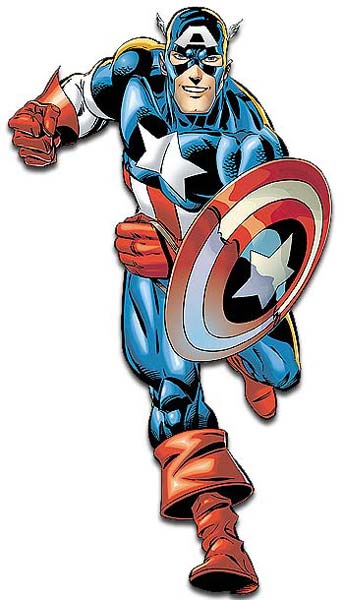 A lot of Hollywood types have been chewing on their fingernails this summer. Once reliable suckers, the young guys under 25 have been notably absent from the theaters. Since I have a vested interest in a producer eventually discovering Super Acadia and the Amazing Evangeline Sweet, I thought I’d conduct an informal poll in the mall parking lot behind Friendlies. This is where the local bored youth of America hang out in beat-up old pickups with fancy rims. “Internet Porn,” says one acne scarred dude with a Coors. “Video Games,” says the owner of a Bondo-colored Ford. He’s got a level 85 warrior on the Cho’gall server. “What about you? Are you getting one of these guys to take you to Captain America? ” I ask the owner of a pair of alarmingly short floral daisy dukes. “Yeah, that Chris Evans is kinda cute!” She says with a flashing smile and I’m wishing I was eighteen again and wearing my letter jacket in the summer heat just because it impressed girls.

The suckers are back. Captain America bopped Harry Potter on the nose with an estimated $65.8 million box office on its opening weekend. Audiences are still going out of their way to avoid seeing movies in 3-D especially the re-purposed ones like Captain America but that’s okay with me. Vange just might poke an eye out in 3-D with her superhero costume. Most of the reviewers are saying it’s wonderful nostalgia just like a pulpy piece of Mom’s apple pie, but you gotta love the Village Voice for calling it a “hokey, hackey, two-hour-plus exercise in franchise transition/price gouging, complete with utterly unnecessary post-converted 3-D.” I think I fall in the middle there agreeing with Karina Longworth of the Voice while at the same time loving American hokey and hackey.

Captain America is a piece of history. He’s real propaganda, first drawn before 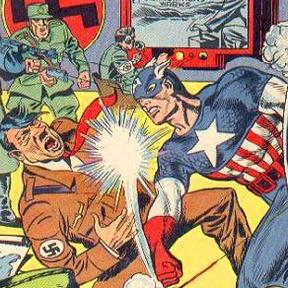 Pearl Harbor and he spent the war years fighting the Axis powers. This isn’t just another origins story. There were a whole group of heroes fighting the war  from the pages of comic books. Cap was fighting the war on the home front just like Little Orphan Annie and those other ink heroes. They were all for the Allies, especially the USA and the Japs and the Nazis got bopped on the chin in every issue. A lot of the jokes from the movie are based on the original Captain America. His first cover had him punching out  Hitler and there were a series of awful B-movies with Cap fighting the war. It makes you wonder what would have happened if the war had turned out differently. Would I be writing a review of a documentary about the American propaganda machine and the war criminal Captain America? It’s not all that implausible. Portions of Cap’s history have already been retconned to cover up his Cold War activities. It turns out that there was a guy so devoted to Cap that he had plastic surgery and took the Nazi copy of the Super-Soldier serum to become the new Captain America. Since it was a Nazi serum, the new Cap went violently insane and paranoid regarding even innocent people as Commies. The insane commie-hating Cap and his fake Bucky are in indefinite cyro storage. Yeah right, no wonder China, Russia, and several other countries are planning to distribute this movie as The First Avenger with no mention of Captain America.

If you just read that and went, “Wow, how cool!” or worse, want to make a comment debating me about the 1953 Captain America, you’re the built-in audience for this movie. My movie tester Kristin loved it. I had to come back and Google just who Dum Dum Dugan was, so next time I’m taking Kristin so she can explain these bits of Marvel lore for me. I haven’t yet decided if the Marvel Easter Eggs are annoying. It does seem a little bit like I’ve seen three or four full length advertisements for The Avengers already. It also seemed to me like someone decided that they had to explain who these minor characters like Thor and Captain America. Will the Avengers be that complex that it can’t stand alone?

CGI stands out in this movie. In a reverse of what’s normally done the studio transformed beefy Chris Evans into a 90-pound weakling. There were moments I got confused whether the CGI was before or after Steve Rogers and I’d made a note to look carefully before I went to the movie because everyone is talking about this astounding effect. Agent Peggy Carter didn’t need any CGI as Hayley Atwell came to the set well-endowed to start with. Whether this is natural or the chicanery of a plastic surgeon is undetermined. I don’t think that you can make Tommy Lee Jones any crustier and, even behind the big red CGI skull, Hugo Weaving is still able to act the Nazi.

I went to see La Vie Sexuelle Des Belges with Sangfroid. He was the first man I met that didn't have a tv

If you’re thinking the forties settings are familiar, that’s because director Joe Johnston did it all before in The Rocketeer. It’s the same muted colors and modulated lighting, but it’s my opinion that the retro-futuristic sets are more successful in The Rocketeer. There’s too many amateurs out there doing Steam Punk for me to buy into the slick Star Trek style interiors of the Red Skull’s flying wing and the Hydra bases. I’d cheer the flipping numbers of the self-destruct clock only to boo some knob or switch that was stylistically out of place in the next scene. Sure, I know it’s picky, but I’m the guy writing the review so I don’t have to worry about the movie budget.

As I mentioned earlier, comic book fans are going to appreciate the care in which Captain America consolidates the various origins stories into something familiar and digestible. I have to admit that my friend from the parking lot with the daisy dukes looked a bit bored. Maybe I was too since I was checking to see if she was cold with all that skin showing. Since I’m the kind of date that explains that Toby Jones, who plays the villainous Dr. Arnim Zola here, was really good playing Truman Capote I’m sure I would have had her snoring. (Note: wearing daisy dukes does not lower your IQ and I’ve been to the movies with several half naked women who would have preferred going to see Infamous)

Anyone willing to sit through the credits is going to be rewarded by a short teaser for the Avengers. Most of the audience knows about the Marvel teaser thing by now and only the die-hard geeks were staying for the teaser. It wasn’t worth waiting for. I kind of wish I’d followed the girl with the daisy dukes on and asked if she thought Chris Evans had his shirt off enough in the movie. 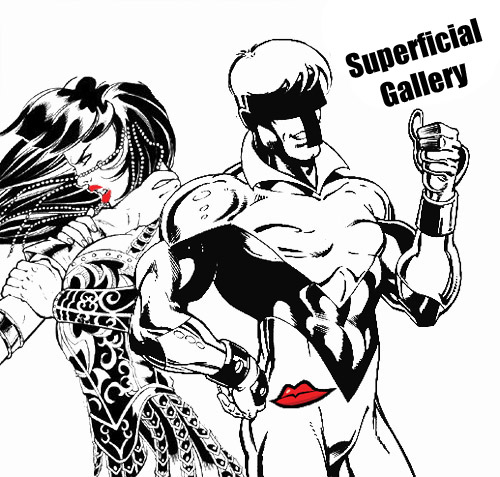 Coming Soon to a Theater near you. The adventures of Super Acadia and Evangeline Sweet. Thrill to the sarcastic one liners of Acadia while Vange battles the villains. Marvel at how that T is stuck on. Be amazed that Vange isn't choking Acadia instead.