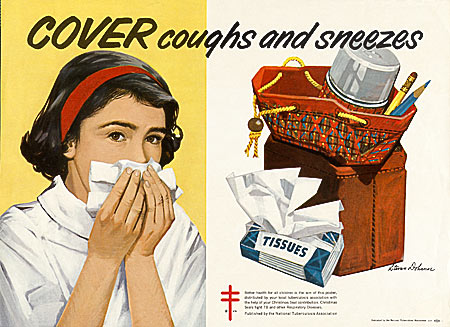 Racked with chills bad enough to break teeth, throwing up and a fever of one hundred three…

Wait that’s me in reality not the movies. I haven’t had a single peanut from Hong Kong and even though I think I’d risk being contagious with Gwyneth Paltrow in a sordid layover in Chicago she has not once shouted “Do me Joe” anywhere I can hear. She was pretty hot in that kissing scene in Sky Captain and the World of Tomorrow. Acadia I also promise I’m not Patient Zero in the welcome apes scenario either so you can stop worrying about that.

Contagion is supposed to scare the hell out of you in an entertaining and informative way. There’s something that just reeks of experts wanting to keep their jobs in that statement. These are the ones that tell us a virus will leap the barrier from animal to human in some icky non American place like China, Africa or Great Britian (Moo, Moo, I’m a mad cow Moo) where they have no hygiene. Wonderful clean people with a munificent government and the best health care system in the world will fly over to these bad foreign places and then fly home again on our wonderful Jet aircraft with these germs (“It gets on airplanes. It flies at five hundred miles an hour”)  then bang it’s all over except for the fighting over which type of animal gets to take our place.

Of course it’s all said a little less sarcastically and in the case of the movie a little more dramatically. The truth is we’re never ready for the next pandemic. It’s going to hit us hard and come right out of left field and the pundits who are going to be shaking their fists at the brave and noble people who fight to control it for not being prepared enough should just bite me. The only thing I can guarantee is that it will have nothing to do with the Hays Code.

People it’s not 1920 anymore. Why does every married woman or teenager that has sex have to be killed off in a gruesome fashion. Worse still why do we buy into it? Am I supposed to feel less compassion for Beth Emhoff (Gwyneth Paltrow) when she dies graphically on film because she had an assignation in Chicago on a layover? She’s a wife and mother and there are enough divorces to indicate that infidelity is not part of the mortality statistics.

“CALL EVERYONE” The pathologist says buzzing open her head with a saw.

Again the truth is more that an over tired intern puts a toe tag on her and they discover Patient Zero well after the fact. Gaëtan Dugas was not labeled Patient Zero till 1984 well after AIDs had entered North America. We felt comfortable reviling him because he was a sexual athlete. Old Will Hays would approved of that movie. Did you know a boy named Robert R. may be the actual first known case of AID’s in the United States. He wasn’t a sexual athlete, never had a blood transfusion and never left the Midwest. Don’t believe the movies folks.

Ok I feel bad when Beth Emhoff’s son dies. Now the Hollywood stars come to the rescue. Dad Matt Damon is still alive but the medical cavalry is coming. Laurence Fishburne, Kate Winslet and Jennifer Ehle are at the Centers for Disease Control and Marion Cotillard rushes to Hong Kong from the World Health Orginization in Geneva. Not enough stars? Bryan Cranston and Enrico Colatoni think it’s a terrorist plot and Jude Law is the internet cliché who’s got the viral video we all want to see.

You know what this is people? This is a wrestling cage match. Hollywood has thrown their oiled up stars into the ring and who will come out on top at the end. I was hoping Jude Law but Kate Winslet got him with a folding chair before Marion Cotillard sucker punched her from the sidelines. Who’s the winner? Has to be Jennifer Ehle from TV’s Pride and Prejudice. Elizabeth Bennett saves the day and gets Mr. Darcy? 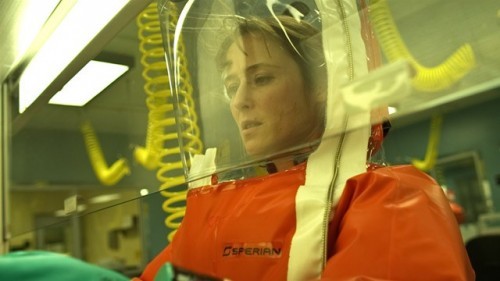 I’ve got to call Soderbergh on the idea of health care workers striking during a pandemic. Historically people just don’t do that. Men and women went into Chernobyl knowing it was a death sentence. They’d stay and fight in hospitals. Sure politicians would backstab each other in the blame game while they should be doing their jobs and others would pile on hysteria when it’s least needed for ratings but the hospitals will still be staffed as long as there are health workers left.

I like Steven Soderbergh. He’s thinking of giving it all up to paint. It’s not like him to let a movie do what it wants to and flop around trying to attract attention with big names and scenes of empty streets. You might be interested in this from the standpoint of what might happen but as an entertaining evening you might as well go bowling.

In 1918 The Spanish Flu, an ususually severe and deadly pandemic spread across the world. It lasted from June 1918 to December 1920 spreading even to remote Pacific Islands and the Artic. Between 50 and 100 million people died making it one of the deadliest natural disasters in human history. Everyday life was hampered, stores required that their customers leave their orders outside the door. There were cases where so many health care workers died there were none to take care of the ill. Even using the conservative numbers 27% of the global population was infected. The tremendously odd thing about this horrific event in human history is that we tried to forget it. Some historians even call it the “Forgotten Pandemic” We survived and moved on. We’ll do it again even if something like in the movie Contagion hits us.