Superficial Movies – Harry Potter and the Deathly Hallows: Part I 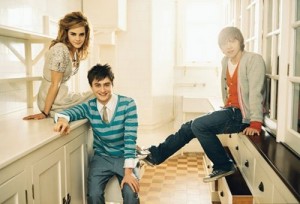 For me, the whole charm of the Harry Potter franchise is having someone else, preferably someone under the age of twelve, explain the whole complicated thing to me: “See Voldemort hid bits of his soul in Horcruxes and they have to be destroyed before you can kill him. No, Harry doesn’t date Hermione. That would be retarded. She snogs Ron and they have babies!” Far be it for me to explain the difference between the British slang snogging and shagging. This is also the drawback to Harry Potter. Since I’m not currently dating anyone with a child that has an encyclopedic knowledge of all things Hogwarts, I’m pretty much left in the dark since the movies assume you know the details already. Why are Harry, Hermione and Ron spending all that time in a tent arguing? Dammed if I know. Why are they heading off on this quest or that one? Don’t ask me – go find a twelve year old.

Of course, the original twelve-year-old Potter readers are twenty-five this year and there was never a shortage of older fans. Knowing they have a demanding audience, director David Yates and screenwriter Steve Kloves cater almost exclusively to the Rowling crowd. Every time they deviate from the canon in the slightest, someone complains loudly. Even the charming little dance scene between Hermione and Harry draws criticism for not being in the books. It leaves someone like me begging for a little movie in between all the trying to fit J.K. Rowling’s massive plot into the confines of a movie.

A lot of money has been spent to make this one a gorgeous shoot. The magic is so seamless you can forget that it’s supposed to be extraordinary. There’s a lot to look at too; Hermione gets tortured. Bellatrix Lestrange would scare the crap out of Cruella De’Ville and if you’ve got a thing about snakes then you might want to give this movie a pass. Long running characters die off and despite the rating it veers off into horror territory. Despite the occasional laughs like the Harry Potter in a bra and the idea of flushing yourself through the toilet the movie is just as grim as the final book.

With Potter regulars like Julie Walters, Robbie Coltrane, Alan Rickman, Micael Gambon, Timothy Spall and Brendan Gleeson all returning Rowling fans will not be disappointed. I think maybe I’m going to wait till it comes out on Netflix Streaming.