Superficial Movies – Pirates of the Carribean: On Stranger Tides

Pirates of the Caribbean: On Stranger Tides is as large a pile of Mickey Mouse droppings as you’re ever going to get on screen. Furthermore, even with this bloated retread of a movie stinking up theaters, the only way you’re not going to see a fifth Pirates movie is if Johnny Depp dies and they can’t figure out how to prop him up with wires and sticks. How much risk is it to develop new characters and new concepts, Mickey? Johnny Depp might be a weird ass guy but he’s an actor dammit and you’re wasting my time making him do the same routine that was so funny in 2003.

It’s not just Mickey that’s beating the same old dead movie. We’re getting 27 sequels in 2011. Of those four, will be fourth sequels, five fifth sequels, two seventh sequels, and Harry Potter is going to hit number eight. Paul Schrader (Mishima, Taxi Driver, Raging Bull) told Roger Ebert that essentially Hollywood is done making grown-up films and that anyone making “creative projects” is turning to long form TV. I have to agree, of all those sequels the only one I’m looking forward to seeing is the Muppet movie and that’s only because I have a serious thing for Miss Piggy. 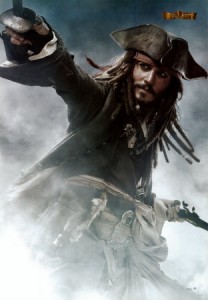 For a certain crowd, Johnny Depp  is always going to be worth going to see. Some folks would gawk at Captain Jack Sparrow if Johnny turned into Fat Elvis and did a really bad Vegas show. I like Johnny Depp and this all sounds like I’m blaming him for this fiasco. Even if you’re an ACTOR and not a mere mortal actor, sometimes you’ve just got to bend over and take that huge paycheck. Disney knows what to throw at us right away. There’s Captain Jack hauled before King George. I wonder if he’ll escape? There he goes over the roofs of carriages! Whoa, was that Judi Dench? For a couple of minutes here, I’m thinking that we’re going to have fun.

Penelope Cruz has been dropped into Pirates for some Spanish spice as Angelica, the daughter of Blackbeard (Ian McShane). You know I have loved Ian McShane’s work since Lovejoy and he might be sixty-eight but he’s still thrilling us with roles like Al Swearengen and Bishop Waleran. Oh yeah, that’s Paul Schrader’s long TV, isn’t it. What the hell is wrong with a movie when I can’t even like one of my favorite actors! Penelope Cruz has no charisma with Johnny Depp, either. It’s all a wet fart wandering around in a swamp in an oversized leather coat. This is Disney, so there was no way we were getting topless Penelope and since she was pregnant anyway, we get a lot of blurry camera work when it’s pointed in her direction — not lush romance with Captain Jack. 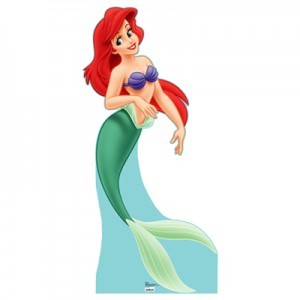 There’s a missionary (Sam Claflin) and a Mermaid (Astrid Berges-Frisbee) who fall in love and I’m not sure why they’re in the movie at all except maybe that Disney wanted Mermaids and someone said let’s turn them into really hot babes and like Shark Week on Discovery, you know. (Get the impression I’m hating on Hollywood execs today?) You need a tear from a mermaid to get the Fountain of Youth to work correctly but who knew that Ariel was dragging men down into the depths and eating them when she wasn’t singing with that Jamaican crab?

Captain Barbossa (Geoffrey Rush) has lost the Black Pearl and his leg but he’s going to help Captain Jack find the Fountain (a story line that goes thud). Kiera Knightly and Orlando Bloom are AWOL and we really miss them because Johnny is bored with playing Captain Jack. He wakes up a little bit when Keith Richards shows up to play Jack’s daddy but then he goes right back to the same ticky ticky we saw in the first three movies. Then at the end, we (the four fangirls and I) wait through endless credits for the key scene at the end that I don’t even think the fangirls were impressed by.

I’m not the only one wishing Blackbeard had started saying “Cocksucker” and fed the pigs with some pirates but it never happened. Too bad, it would have kept me awake.