There is a village of tiny blue men and they are persecuted by an evil wizard named Gargamel. Anyone of a certain age is having flashbacks right now. IGN called the Smurf television show “Kiddie Cocaine” and it wasn’t elegant but you sure could freebase all that blue animation ink. Yes that’s right I admire the Smurfs. Don’t be so shocked I can justify it. My only problem is that I suspect that all the subtle cleverness and “Cocaine” has been taken out of their new movie leaving us with nothing but little blue freaks cavorting in New York. Smurf That!

I went to the city recently and didn’t go to the movies. Where I live there is only one theater, it’s not a multiplex, and it tends to show the lowest common denominator flick. When I go into the city and have choices I go to the movies. It’s a long standing habit. I’m not a fussy cinéaste by any means. I enjoy B movies as much as I do art film. What’s wrong? There was a lizard being the sheriff of a western town, a recruitment film for the Marines in which the Hadji’s are thinly disguised as aliens so nobody can complain and something where Joan Cusack is kidnapped by Martians and has a bizarre animation that’s some sort of cross between human and cartoon. Soon we’ll have The Smurfs to take up another Theatre and deprive me of another choice.

When the evil wizard Gargamel chases the tiny blue Smurfs out of their village, they tumble from their magical world and into ours — in fact, smack dab in the middle of Central Park. Just three apples high and stuck in the Big Apple, the Smurfs must find a way to get back to their village before Gargamel tracks them down. 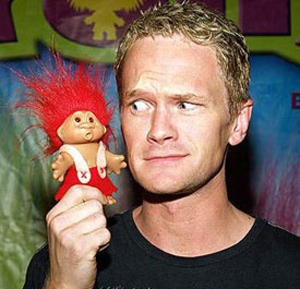 For those of you who think I’m dissing the Smurfs themselves think again. Belgian graphic artists have a way of twisting mundane cartoon subjects into art. In a weird twist the Nazi occupation and subsequent banning of American comics and animated films supported the young Belgian artists and allowed them to evolve their own particular style. Hergé‘s The Adventures of Tintin, still amazes me. That’s the Ligne-Claire style for you non artist types but there’s the realism of Mœbius and the comic-dynamic style of Underzo and Peyo.

Peyo that’s the guy who created Les Schtroumpfs known as the Smurfs in Dutch and English. Did you know that Smurfberries are actually Sarsparilla? Smurfing Hell I’ve had that. Warpigs in bombers wiped out the village in 2005 for UNICEF causing trauma for Smurf fans everywhere. It’s a clever use of an extremely dumb concept about little blue men (Smurfette is suspect since Gargamel created her. *gasp* could she be a cross dressing Smurf not a girl at all?) Hollywood takes away all the subtle creative tweaks and makes a movie about little blue freaks in New York. In the teaser their big concept is to turn landmarks blue. I’m not sure why they’re so scared of the creative. It’s always about turning the filet mignon into hamburger. It seems like only the rebels and the indies are making movies that are actually clever and even then once they start getting the corporate bucks they’re turned bland. Smurf Smurf, Smurfing hell! Please make something funny I like going to the movies