In 1980 I went to see Raging Bull. A woman walked out of the theater during the Janiro fight scene. It wasn’t even the most brutal fight in the movie but it was bad enough. Have we become so jaded that what Raging Bull was is now a cliché ridden blood opera for guys in the movie Warrior? There’s no real point here. No Jake LaMotta standing up to a brutal beating. It’s a cage match where the point is the brutal beating. It’s the Circus Maximus for 2011.

Paddy (Nick Nolte) doesn’t drink anymore. It’s one of those dysfunctional movie Irish families that would have any other minority picketing the theater. All that booze has estranged his sons Tommy (Tom Hardy) and Brendan (Joel Edgerton). Poor Ma Conlon’s been killed off so she doesn’t even get to be dysfunctional. These boys are being kicked in the chin by life. Tommy needs cash to help the widow of a combat buddy and Brendan has a poor sick wee daughter. Look there’s a leprechaun we’re all Irish let’s drink some more green beer. The obvious solution is to punch some other slobs lights out for money in underground martial arts bouts. Shore and Begorrah that’s what I do when I’m light in the pocket. 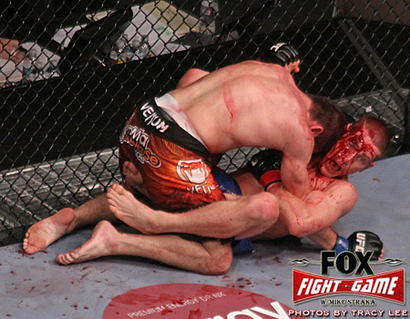 Tommy hates his dad Paddy but let’s him train him. “That much you were good at!” Tommy says with lip almost quivering. Brendan hates everyone and doesn’t talk to Paddy. Tess (Jennifer Morrison) cries, and the school administration wonders why Brendan has all those cuts and bruises all over his face. High school teachers aren’t supposed to climb into cages and go to war unless it’s a classroom so Brendan might get fired. The camera loves those bruises. The brothers might be battered black and blue but they’re still strong inside. Stoic manly men who can only really care when dad’s dead drunk like Tommy does in one key scene.

In comes SPARTA. This is some kind of ESPN channel that wants to put up a bout with a five million dollar prize. “Growing up you all wanted to know who the toughest kid in the neighbor hood was right? I want to know who the toughest man on the planet is!” As quick as you can say Gentleman Jim the brothers are  in the ring together and all that rage and emotion pour out inside the cage. Well if I told you the outcome then you wouldn’t have to pay to go see who comes out on top would you. I’ll only say that I liked both brothers. Yeah it’s not Raging Bull but these two actors put a lot of passion into this movie. Drunken Irish cliché dad Paddy just can’t figure out who to be more proud of as his two sons beat the crap out each other inside the cage.

There’s not really a lot of that going on here anyway. Emotion and family conflict is like the articles between the girls in nudie magazines; it’s just there to fill in the spaces between the beading sweat on muscle bound men beating each other till drops of blood, all lovingly caught by cinematographer Masanobu Takayanagi, fall. You want my opinion? Go to a real boxing match. Watch the spectators in the front row cover their good clothes with newspapers to prevent stains from the spattered blood. If you can stomach that then go watch High On Crack Street. Dickie Eklund is the real face of Tommy and Brendan and it’s not really as pretty as Hollywood wants you to think.