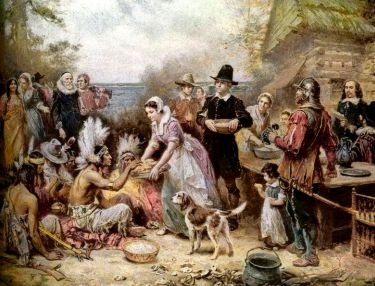 Contrary to what you learn when you make those construction paper turkeys by tracing your hand it hasn’t always been turkey and mashed potatoes for Thanksgiving. Basically after almost starving that first winter the Pilgrims plopped anything that moved or squiggled onto their plates for their Thanksgiving dinner. Sure there were turkeys but there were also ducks geese and swans. If you weren’t eating swan with Governor Bradford it was likely you were stuck with fish; Eels, bass and salt cod with a side of clams and mussels. Lobster was also on the menu. Of course back in Colonial times lobster was what you fed your slaves. Indentured servants actually had it in their contracts that they wouldn’t be fed lobster more than a certain number of times a week.

Also on the menu were cranberries. Never say the Wampanoag didn’t have a sense of humor. The stupid white people are starving. Let’s give them some food. No not the blueberries, give them the cranberries, they taste horrible anyway. You have to smash them with deer meat and fat to make them edible. We’ll tell them to boil it into a compote. (like what you get in the can)  Americans and Canadians will argue from now on whether the jelly kind or the whole berry kind is better. We’ll even get back at those Europeans since they’ll start eating imbimi (bitter berry) during their winter festivals. 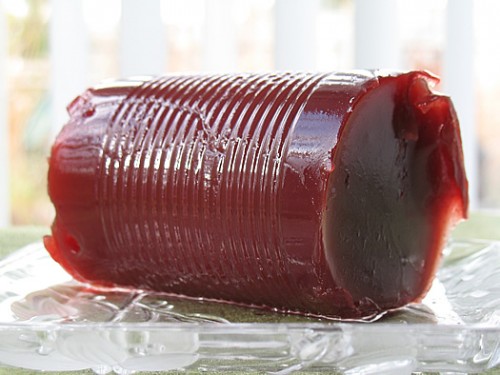 Since “tastes horrible” wasn’t going to sell Thanksgiving feasters the Pilgrims changed the name to Crane Berry since they thought the blossom looked like a crane’s head. Being Americans it got shortened to cranberry and bitter berry is now processed into a wide variety of food products. There is a thing called the functional food Industry that takes food that’s inedible and gives them popularity by branding them superfoods. Like the much tastier blueberry the cranberry is loaded with antioxidants and nutrients and is reputed to cure everything from thrush to cancer. Oddly enough though studies have shown that quaffing down gallons of Cranberry Juice doesn’t actually do much for a urinary tract infection but it may keep your gingivitis at bay.

So on to some science facts you can spout at the dinner table while Uncle Frank the Tea Party fanatic  is getting ready to have a screaming match with Grandma over how the President is secretly related to Adolph Hitler because Glen Beck told him so.

Most fruit have developed tasty flesh so they can migrate away from the parent plant. It makes sense, some animal gets fed and your seeds get carried away and fertilized. To keep the animals from jumping the gun immature fruits are loaded with tannin which makes them taste sharp and dry. When the seeds are ready to go the tannin fades and the sugars comes out to attract hungry critters. Us humans mostly hunt in the supermarket now but the idea is the same for the foods we like to eat.

Cranberries don’t do that. They’re the outlaws of the berry world. They load their berries up with bitter tasting tannin to discourage animal consumption and thrive in the wild on the edges of streams. The cranberry has little air pockets that allow them to float downstream and find another shore to grow on.

So why do we eat them if they’ve evolved to taste bad to animals? First of all the tannin made them extremely useful. First Nations people used cranberries in poultices to stop bleeding and prevent infections which the tannin does quite well. They also used them to cure leather and dye clothing and lets face it there are a lot of foods out there that starving people tried eating out of desperation. Even I discovered that fried dill pickles are actually edible while travelling in the wilds of the American south. Grits however are still questionable.

Why are we still eating them? Because they’re easy to harvest. Unlike the wild blueberry harvest which requires quite a bit of labor you can just flood a cranberry field and they float up so the farmers can just skim them off the surface. Contrary to popular opinion the cranberry bogs are not flooded year round only during harvest. In fact farmers are now creating sandy beds above the water table that are artificially flooded to harvest their cranberries. 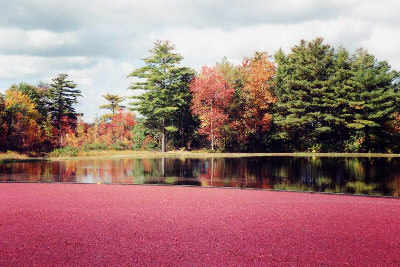 If Uncle Frank the Tea Partier hasn’t shut up by now tell him that cranberries are associated with American communism. He’s a fat head and will believe any fool thing you feed him. Tell him that all the communist red flags were dyed with cranberries and after he gets put to bed for irritating Grandma past the point of tolerance you can explain that the cranberry cooperatives are some of the earliest examples of agricultural marketing in the United States. The National Fruit Exchange almost priced cranberries out of the marketplace until in 1918 they spent a fortune on advertising suckering more American’s into eating the bitter berry.

Cranberries are also one of the few legal monopolies in the United States and there was a year without cranberry sauce in 1959 when it was discovered that much of the cranberry crop was contaminated with the herbicide aminotriazole. Frankly though if you’re still going on about cranberries at the Thanksgiving table by the time you get to desert Grandma is going to think you’re a crank like Uncle Frank.