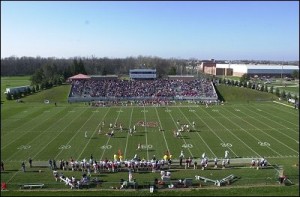 I live in a small, mid-western college town and I need some advice. I am just an average working stiff who likes his football. I am not a crazy fan, like those yahoos who paint their faces or who paint letters on their large bellies and then show everyone, including the TV cameras, even if it is snowing and 20 degrees outside. Nope, I am a typical dude with a passion for football.

I love the tailgate parties, good place to scope out the local babes. I am not talking the pro ball stadiums where you have to get lit before you go in cause beer is a small business loan for an 8 ounce cup of warm swill. No, I am talking down at the campus. See, its like this, I am not going to college, I am a working stiff like I said, but those college babes are the bomb.

The problem is, all those yahoos with the paint and the yelling and those cowbells seem to get all the attention. I got a nice pickup and cold beer and a basket of hot wings, but the ladies just pass me by. Any advice for a normal, average joe on how to pick up hot college babes? I like football, beer, mud-bogging and long walks during a pub crawl.

Looking for Pigskin Love (picture below)

Answer and Video after the jump. 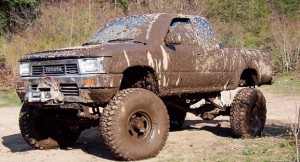 Pulling up in your pickup, dropping the tailgate and cracking open a can of brewski while you schmear hot sauce all over your best flannel, probably wont win many hot babes. I think it may creep out most ladies. If you are not a fan of the football team to the point of at least knowing the name or wearing some sort of ball cap with the logo, you probably wont score any points. Dude! You don’t even list using a wing man, how in the world do you expect the ladies to look at you other then as some creepy schmuck trolling for babes? A further bit of advice? Always.. no.. no.. never, try to pick up babes in a muddy truck.

Dude walking in front of the camera, instead of watching the pom pom squad. Three strikes and you’re out dude. Time to reboot man, reboot.