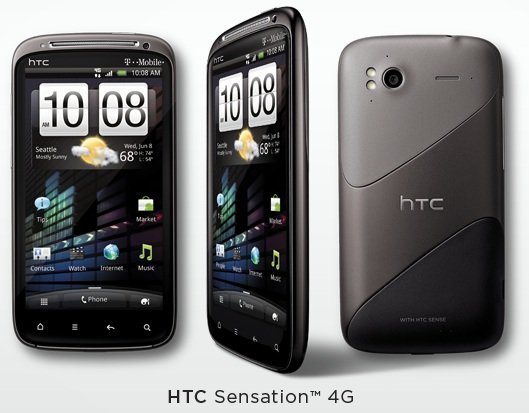 It’s probably not the best idea to sit down and write a review of a phone on a day where that phone gives you trouble making a call. But, two things. First, the issues were mild and likely my fault anyway. And, more importantly, second, no one has really truly needed to place a phone call with a cell phone since the day Zach Morris was stuck in school on senior skip day and desperately needed to phone the radio show trivia contest taking place at The Max.

On that note, I have not found a way in which my HTC Sensation 4G can craft a bonsai tree. However, it wouldn’t shock me if I just needed to look harder. The Sensation is a phenomenal phone and the most noticeable flaw is that Sensation is a bit silly for a name, but, what phone doesn’t have a silly name attached to it these days?

The Sensation has been around about 7 months now, so, in terms of specs, you’re probably not going to walk yourself into the best phone on the market when buying it. But, make no mistake, it’s still fairly top shelf sporting a Dual-Core, 1.2 GHZ Snapdragon Processor. With a tradeoff likely being that you can find a good deal on the phone pricing. It seems like a strong step up from the phones that T-Mobile was putting out in the 8 or so months before the Sensation’s release, so, I imagine it has held up well.

It handles basic phone tasks with ease and, really, has handled video and gaming with only small hiccups. Sometimes when I exit a game like Grand Theft Auto III I get a white screen with the HTC lettering on it for a few seconds while the rest of the software loads. It’s a minor issue that seems to crop up if the phone hasn’t been restarted for a week or so. It’s the only complaint I have about the phone, and I’ve noticed it a lot less lately. It mainly came about when I first downloaded several major games during Androids 10 cent APP sale. So, maybe the phone has adjusted? But, I felt it a complaint worth noting.

HTC has also announced it will be one of their first phones to receive the latest Android software update: Ice Cream Sandwich.

But, it’s not like Sensation owners are likely clamoring for an update anytime soon. It’s not a necessity. A feature of the HTC phones is their HTC sense overlay to the Android software. Some folks won’t ever like that. They want native Android, and I can’t blame them. The best thing I can say is try it out. When reading through a lot of the new Ice Cream Sandwich features, it seemed like a lot of that stuff would already be found in the HTC Sense overlay. Especially when it came to the lock screen and the look of the phone.

They also make this phone in some kind of “BEATS” audio version. Which I think just means every time you get a call Dr. Dre yells out, “ANSWER THAT.”

When I checked the list of supported devices for the Android and IPhone OS release of Grand Theft Auto III, I was disappointed to see that my device wasn’t listed. Then, it showed up in the Android Market. The cost was 5 bucks, and I had no idea whether my device would actually run the game.

I took the plunge.

Risk-Reward and all that.

The end result was a game that, to my surprise, ran spectacularly. Like, not even a minor hiccup in game play in the month or so that I’ve played the game. That seems impressive, but, I guess smartphones actually have better specifications than the original PS2 or computers when GTA3 originally hit those. The game has run smooth every time I load it and switches to the background without problem when some jerk calls me while I’m trying to roll around in Mafia Sentinel cold pullin’ drive-by shootings on those pesky Triads.

The first thing that is noticeably difficult is the controls. But, they aren’t a nuisance to the point of making you want to shut the game off. You’re going to figure them out. You can even re-size the controls if you’re having trouble, so that is a plus. The hardest part with the controls is the shooting. I still struggle with the auto-aim. Driving is tough at first, but, easier to learn…at least for myself, the first racing mission really forced me to learn how to pull off mobile driving.

Storyline wise, it’s the same game that was out 10 years ago. If you’re not into the series, why would you get this thing? But, if you are a GTA fan, chances are you probably haven’t done much with the original version of this game and so the mobile version becomes an excellent and nostalgic time killer. The value isn’t only in nostalgia, hopefully it will bring more fans into the series. From the games I’ve played on the Android platform, this certainly tops the list. I’m not a huge gamer, especially on this platform, but, this game really opened my eyes to what mobile phones are capable of in the way of gaming.