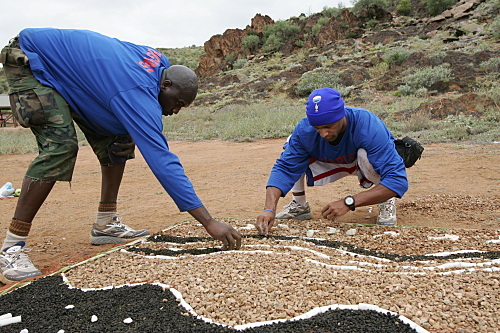 LAST WEEK I GOT BUSY–HERE’S WHAT YOU MISSED

The cowboys were way back, stumped by the semaphore decoding. Thanks to pre-purchased flights, they caught up when the flights bunched the teams up into two groups. Big Easy hit on a random travel agent chick. The cowboys are very Okie in that they really sturggled with the skiff. Detour: aboriginal customs: spirit world (tradional materials to recreate a mosiac) or natural world (using paint and a clay like pigment to use stencils to create ancient markings).Big Easy chose the mosaic and was singing along with the Aboriginal dancers. The goth person saying,”Bring me the children”, “Get the children,” scared the fuck out of me. I have no problem picturing him skewering and roasting kids like oversized hotdogs. The father/daughter Asian team fought and overthought the task as usual. Only one team chose the spitting task.

The detour involved  team members dressed as  kangaroos and using the peridotic table. Two elements are highlighted. Teams need to figure ut streets are named for elements. The two highlighted elements are the only two streets that intersect and the next clue is at that intersection. Teams used bystanderss and their own brains to figure out the clue. I think I would struggle more than they seemed to. Team Aspberger won the leg. They won a trip for two to somewhere.

THIS WEEK AFTER THE JUMP, SUCKAS

They flew to Hong Kong and had to do some archery thing. Then they had to choose between some serenity cleansing prayer thing involving standing under a freezing cold waterfall from Mount Fiji or mucking around in a mud pit looking for a plastic frog while others pelted them with mud balls. Big Easy and Flight Time are rocking along this one but got jammed up because they moved Asian team’s fanny pack for some weird reason and got docked 30 minutes because of tattle tale daughter. They also paid back Team Aspberger by letting them have the flight to Hong Kong. I do admire honor. Team Bitch Leaders knocked a side mirror off another car and were delayed so that’s a yay. Team Cowboy rocked the archery thing and managed the mudpit well. Team Gay Dad/Son gave up and got eliminated.