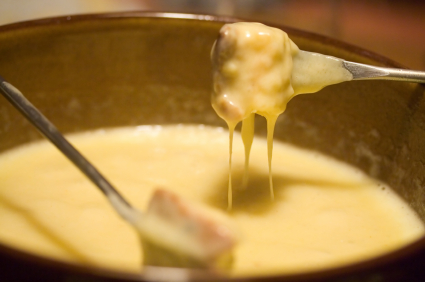 Holy crap, that looks delish. I wouldn't even need a team mate on this task!

Teams leave Austria in the middle of the night (3 am), traveling by train for Lichenstein. The Cowboys mention they don’t feel like outcasts but note no one has partnered up with them, either.  Vanilla dad mentions they’ve been up for 36 hours but he doesn’t want to miss the view from the train’s windows. It appears teams bunched up on the train so all standings are out the window again. Jen & Kisha flirt with the Globetrotters and omgosh how cute would those couples be!?  Team Aspberger’s cabbie displays a willingness to drive dangerously, saying, “It is crazy what I do.”

One team member is provided a map, a motorized bike and an odometer. S/he must bike the length of Lichtenstein and tell a sports dude the distance clocked. If they are wrong, they have to re-do it.  Flight Time sings and it’s awesome! The cowboy says he feels like Dumb and Dumber. Kisha dropped her map! My gosh, she is so pretty. Team Aspberger reaches the skiing dude (Marco someone) first and says 22 km and he is correct! Kisha’s right behind him and he confirms for her 22 km is the right answer. Cowboy has to re-do the trip because he got lost.

Kisha and Jen and TeamAspberger saved Flight Time from having to re-trace the trip by telling him it’s 22 km. This is a HUGE bennie for the Globetrotters. Flight Time then told Team Vanilla. Goth girl got it right on her own and poor Cowboy has to re-do it putting him waaay behind. Teams seem to be actively gunning for the Cowboys. Cowboy got it right on the second try. Teams are divvied up on three different trains.

Speed bump: Team Vanilla must figure out how to gas up one of the motorized bikes using a ration of gas to oil and then use the bike to complete the cross-country trek. The dad figured it out right away. Good for him; I’d still be there.

Teams next take a train, crossing The Alps to Gutenberg Castle, a ski/tourist town

Detour:  choose between Cheese and Wheeze. In Cheese, teams must eat an entire pot of  fondue and in Wheeze, they must haul 20 pieces of luggage to different hotels.

Holy shit, how is this even a decision? Cheese all the way, fools.

Team Aspberger  are such babies. Whining about eating cheese? What’s next, bitching they have to lie on a beach?

Aspberger chooses against the U Turn. Teams must use an electric taxi to go on to the Moos Chalet, the next Pit Stop. Jen And Kisha decline the U Turn as well.

Team Aspberger comes in first, winning a trip to Curacao. Omgosh, remember when I said they would bitch about lying on a beach? Yup. I called it. Jen and Kisha come in second.

HOLY SHIT. The girl Goth made the “boy” Goth ride in the luggage cart with her pulling him. HAS HE NO PRIDE? I have diamonds bigger than his balls.

Globetrotters are missing two baggage claim stubs. OH NO. Globetrotters and Cowboys are duking it out for last, oh this is AWFUL. I might cry. Globetrotters U Turned the Cowboys. I AM DEVASTATED. The only upsides, The Globetrotters seemed genuinely distressed about the U Turn and the Cowboys took the U Turn with good grace. They ate the cheese cheerfully, hustled to Phil, and he eliminated them. I’m actually crying. Oh good gravy, brother man.

Next week: Teams do something in the snow in at the base of the Matterhorn. Big Easy gets crabby. Who cares, the Cowboys are gone.