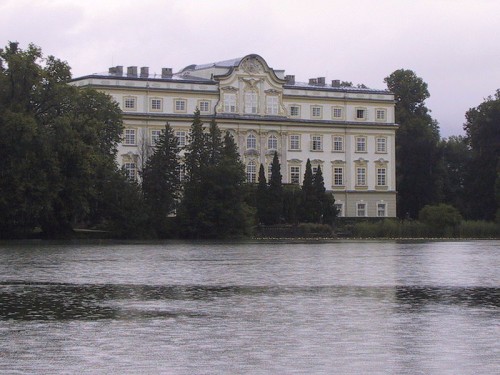 Teams fly to Vienna, Austria, find marked Ford Foci (?) and zoom to their next clue. The Cowboys chose a different flight, arriving thirty minutes after the other teams.  Phil gives them the clue via the navigation system. He tells teams to put the car in reverse to see the clue on the back-up camera. Team Goth bickers throughout the whole thing. The clue reads, “Schloss Schallaberg.” Team Vanilla can’t figure out the touch-screen navigation and sit there like doofuses.

The Cowboys are in last place and aware they can’t afford a single mistake. The Globetrotters get a hotel desk clerk to print them a map, Team Aspberger dislikes the weather but still manage to get there first. The castle gives them a book with the Vienna National Library written on the flyleaf.  Teams drive to the National Library where they trade the book for the Detour clue. Team Goth thinks the castle looks “special” and refers to a very feminine girl as a “he.” They have some serious gender identity issues. Globetrotters get there next followed by Team Vanilla.

Detour: Long Hard Walk: Take couch from one place significant in Sigmund Freud’s life and deliver it to another.

Quick and Easy Meal: Pick up two local meals, enter dining cars on a Ferris Wheel and eat all the food in one 12 minute rotation.

Kisha and Jen, Team Aspberger, and Team Vanilla choose the eating. Teams Goth, Globetrotter, and Cowboys chose the Freud couch task. Team Goth neglected to use the furniture dolly. Neither Jen and Kisha, Team Aspberger, or Team Vanilla finished eating in time and changed to the couch task. Big Easy says, “Fuck it,” and just lifts the whole damn thing over his head and carries the couch on his own for a stretch. Team Goth bickers, surprise, and The Cowboys catch up. AND THE GLOBETROTTERS ARE IN FIRST PLACE! Each team makes a bad joke about psychoanalysis. Team Goth finishes followed by Kisha and Jen, The Cowboys (THEY CAUGHT UP!), Team Aspberger, and finally Team Vanilla.

Teams are directed to travel to Salzberg next. The Roadblock requires one team member perform the task of a chimney sweep, wearing traditional garb, and then retrieve their next clue from the clean-out trap. Big Easy cracks me up getting dressed, with his jersey hanging out. He finishes it quickly and they move on to the Pit Stop which is at the Von Trapp estate!!!  Team Aspberger, Jen and Kisha, and Team Goth arrive at the Roadblock next. Globetrotters missed the turn and give up first place to Team Aspberger. GRRRRRR The prize is a new 2012 Ford focus for each team member. The Cowboys hit the mat steps behind Jen and Kisha. Team Vanilla straggles in last. But it is a non-elimination leg and they will have a Speed Bump in the next leg.

I mute commercial breaks and I forgot to unmute it to hear the preview for next week but it looked like they have to eat fondue. I love cheese.