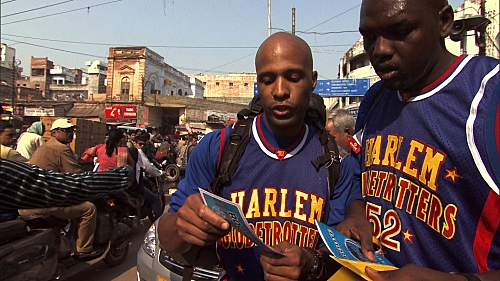 Teams are in India with very easy clues and no extra tasks. They have to retrieve words from a bunch of holy men to unscramble a sentence: “Once you are over the hill you pick up speed.” This is supposedly the meaning of life. Whatever. Big Easy helps Jen and Justin. He’s such a great guy. I loved when he was encouraging the cab driver, “Represent your country!”  Team Goth was working with Vanilla Dad but bailed on him once he was done. Douchebag. Asian Dad does not understand the task and wastes a pile of time wandering around.

Teams next go to a wrestling club (?) to find a strong man. Teams Aspberger and Globetrotters get there first because Kisha and Jen get lost. Detour choices seem like a no brainer: Feed the Buffalo or Feed the Fire. In Feed the Fire you make 50 fuel patties out of manure mixed with shit, slap them on a wall to dry, then start a fire. That’s nasty. Feed the Buffalo involves teams crossing the Ganges, collecting a bundle of hay, and bringing int back across the river and delivering it to an address. Team Cowboy cracked me up: “We come all the way to India to haul hay?!” From here, teams go to the Pit Stop.

This episode was not the most entertaining and held few surprises. The more feminine Goth jumped off a water taxi and the slightly less feminine Goth flipped his shit she was in the river. Globetrotters came in first and won a trip to Hawaii and Cowboys were in 5th. This is pretty much all you need to know. Oh yeah, Team Asian was eliminated.