The Best Bianca Barnett Interview in the World 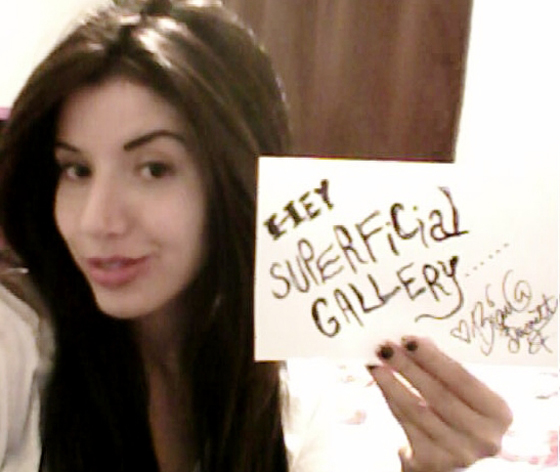 Ever been in a movie?  I mean a REAL movie where there were other people in the room besides you.  No?  Well my latest interview..ee has.  So she > you already.  Do you have your own website like Bianca Barnett has?  Wait, everyone has their own website so that’s a bad example.  Let’s go back to the movie thing.  Bianca is an actress and even if I didn’t already think she was awesome, she was in a movie called “Albino Farm”.  I knew there had to be a way to make albinos other than having sex with albinos!

After the jump, you can read the interview and help me beg Bianca to offer a prize in the big Halloween Costume Contest.  Use the comments to do it and to tell her how great she is.  Because she is great and you all could stand to be a little less self-centered.  Seriously.  It’s almost Halloween, we have an interview with a gorgeous and talented horror actress and you have a chance to cover up your face and win something.  How can this be bad?  Let’s meet Bianca!

You can purchase a signed copy of Albino Farm from my shop. It’s $10, free shipping, and for Superficial fans I’ll throw in a free autographed Pig Bitch 8×10! Rawr!
http://biancabarnett.weebly.com/

And this is on top of the stuff she is sponsoring in the costume contest!  DAMN!

SG:  Ok seeing as you have been in actual movies, you are definitely the most famous non-carny I have ever interviewed. Why don’t you tell the readers how fancy the big award you won this year is!

BB:  Oh, it is fancy alright! I heard about 20,000 people voted from all around the world to make me a Golden Cob winner. I hold the title, “Best Rising B Movie Actress”, and I am very proud of that.

SG:  So tell us what a “B” movie is. I think everyone knows it when they see it, but not the technical definition.

BB:  “B” is for Bianca. A “B” movie stars the ever so awesome BIANCA BARNETT! Yep, that’s the technical definition. Maybe a little something to do with budget, too. Like, not having much of one.

SG:  Why are you so drawn to the horror genre?

BB:  Because it is cool, man! I mean, you get to safely experience your biggest fears, kill people, play with blood, take off your clothes, and toy with death. I think I have died or been dead in almost everything I have done.

BB:  Ha, no, sorry, I don’t go to conventions in bikinis. There are enough girls that dress scantily and if I show up half naked, it might spell trouble. I have yet to do a panel, but I hope I get to do one soon. Who told I LARP in bikinis! You were watching in the bushes, weren’t you??!! Perv.

SG:  What is your proudest professional accomplishment so far?

BB:  Probably having Albino Farm playing on Showtime and all of its channels this year. Though, I hope bigger things will come.

SG:  Since Halloween is coming up, are you going to some Haunted Hayrides and whatnot? What’s the scariest attraction you have ever been to?

BB:  I hope so because I need a break and want to do something fun. This is my favorite season of the year and I want to enjoy it! Knott’s Scary Farm in California was pretty cool. I worked on a haunted hayride once as a scarecrow. It was great- I had this creepy mask and wore a flannel shirt and overalls stuffed with hay. I stood on a hay bale and acted like I was mounted to a wooden cross. There were similar scarecrows on both sides of me, so when the group of people came along, I got to jump off and freak them out. It always got screams, I loved it. Wearing masks or prosthetics is really liberating.

SG:  Between modeling and acting, which has the best payoff compared to how much work it is?

BB:  Acting takes a lot more work but the payoff, and paycheck, is much better. Personally, I enjoy modeling because it is fun to ham it up, but acting is challenging and keeps me on my toes. I always learn something new when I am acting, though, it is not always something good. It is a fascinating study of human behavior and I have always been interested in dissecting people- both literally and figuratively.

SG:  What music videos have you been in, and how boring is it to be in a music video?

BB:  I would not say that working on videos is boring, but it is repetitive. After hearing one song played continuously for twelve or more hours, you usually never want to hear that song again without jamming pencils into your ears.

The best music video I have done is for The Rocketz, a song called Killing, and I had the chance to vamp it up as a pinup slash dominatrix type. I also did a video for Nick Black called Sorry, which turned out okay. The best part is me as a hot vampire, but they did not show much of that footage for whatever reason. Probably because I pissed off the director by standing up to him when he tried to not pay me for my work. You have to watch out for sleazy people like that, especially when you start out and you are not in the union.

SG:  What’s your favorite part of superficialgallery.com? Don’t kill yourself looking, it’s not like we are National Geographic

BB:  Surprise! I like the 31 Scary Things section. Bones, #11, is my favorite so far, but I have a skeletal obsession.

SG:  List all your links, things you are promoting, stuff you want us to know, and whatever else you want! Go ahead!