The Best Christy Ramsey Interview in the World 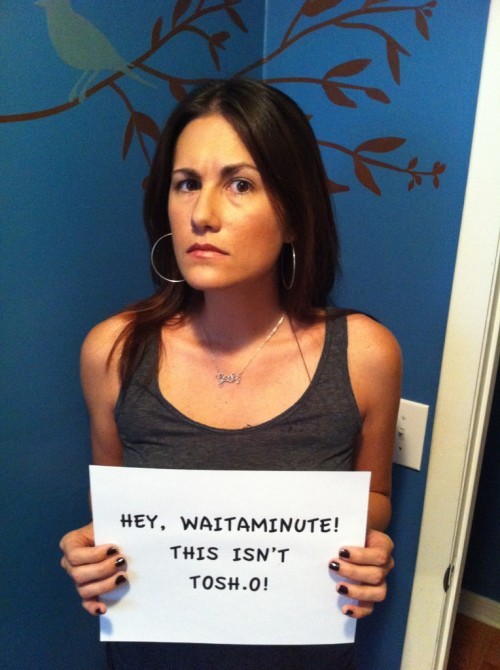 Here I go again.  Finding people to interview and then interviewing them.  Usually I interview authors and models.  Or I just make things up.  One time I interviewed one of the Batman action figures I have on the shelf by my desk but I didn’t use it because he was not in a good mood when we started and it just got weird.

So in order to stay in practice I interviewed Christy Ramsey.  Who is Christy Ramsey, you say?  Well, that’s what I interviewed her for, dummy.  And I can say without hesitation that of all the people I have interviewed on this site, her answers are the longest.  And maybe she isn’t famous.  Maybe she’s just some person who has a website.  Maybe next time I’ll interview the guy that sings at Subway while he makes sandwiches.  But that’s for later.  THIS is about Miss Ramsey.  So let’s get to know Christy, shall we?  Also, she called me a douche-barrel.  I’m not exactly sure what that is, but about 400 “douching with a barrel” jokes spring to mind.  Good thing I’m classy and don’t even mention it.  Read the interview after the jump!

I’m the Techno-Geek Nerd Princess! I’m a blogger, hobby artist, self-professed internetophile and comedic genius in my own mind. I’ve also been told I smell like sunshine.

SG: Oh, so you think you’re better than me?

Only because all my reproductive parts are hidden away on the inside as they should be. Freak.

SG: Well I’m glad that’s straightened out.  So tell us what you do.  Feel free to make things up.

CR: By day, I’m a network administrator and the sole IT person for a staff of approximately 40 people.

In my Real-Christy time, I blog way too much, post on Google+ way too much and do my best to stir the internet-pot a bit to make things more interesting for the people I come into contact with.

In addition to being a geek, I’m pretty artsy-fartsy. I paint and make crafty stuff. I make most of my own jewelry and have an unhealthy DIY complex which prevents me from simply buying already-made things because I look at them and immediately think “This is cool! I could totally make this!”

I’m usually the first person to volunteer for pranks, ideas and shenanigans. I’ve worn a Lemming costume in public for a video on Youtube. I’ve done comedy improv in front of an large audience of amateur and not-so-amateur comedians (in a skirt, no less). I sing karaoke like a BOSS. I’ve traveled across the country to meet internet strangers. I also have more ideas than I have time or budget to actually carry out. (Sponsorship, anyone?)

SG: I met you on Google Plus.  Do you find yourself using it more than Facebook and Twitter?

CR: Absolutely. I haven’t completely given up Facebook because most of my real-life friends are still there and don’t get the point of Google+. It’s the same old “Why should I add people I don’t know??” argument that no one can seem to quite get through their heads. I actually use Twitter more now than I used to because I have a Chrome plugin that dumps my Twitter feed into my Google+ feed. FTW!

SG: If you had to erase one of James Cameron’s movies from the planet, would it be Terminator 2, Aliens or Avatar?

CR: Hmm…Terminator 2 was pretty awesome and Avatar was freaking amazing. I’m not a fan of blood, gore or people bursting open, so Aliens would have to hit the curb. (I’m a delicate flower under this tough exterior, yo.)

SG: What are you doing for Halloween?

I have dressed up for Halloween every year for the last 10 years. I’ve been a fairy, a Disco chick, an undead Egyptian Queen, an inappropriate secretary, Princess Leia (original Star Wars version, not the Slave Leia version), pregnant white-trash Britney Spears and Jack the Ripper’s Unfortunate Prostitute Victim to name a few. This year, the plan is to dress up and go bar-hopping with a group of friends. I’m dressing up as Copernicus the Homicidal Monkey (http://thebloggess.com/2011/07/would-you-like-to-buy-a-monkey/). I have to assemble it from scratch, so it’s definitely going to be…interesting.

SG: Tell us about your site.  Specifically your T-shirt gimmick.  Seems like a smart way to get free T-shirts.

CR: My blog (http://tgnp.me or Techno-Geek Nerd Princess) started out as an attempt to post nerdy, geeky, techy stuff and very quickly became an exercise in observational comedy. It has a mind of its own and refuses to be anything except completely random thoughts that occur to me during the day. I slip some techy stuff in every now and then, but for the most part it’s very spontaneous.

“Shirt of the Now” was originally the brain-child of a friend who gave me permission to duplicate it. It’s SUPPOSED to be a way to show off my t-shirt obsession, but a few episodes in I realized I was just posting pictures of my boobs on the internet, however safe-for-work they may be. That hasn’t stopped me though.

I hadn’t thought of the possibility of getting free t-shirts, but I like it. SEND ME SHIRTS AND I WILL WEAR THEM AND POST THEM ON THE INTERWEBS, Y’ALL! ::makes ‘Call Me’ motion:: cg@tgnp.me

SG: You ever meet anyone famous?  And you can include murderers or like, strippers.  Or gamblers.

CR: I used to live within sight of Florida State Prison, where the electric chair is located. So I’ve never actually met a murderer, but it was always easy to tell when there was an execution about to happen because there would be news vans, picketers and protestors along the road outside the fence. I’m not sure if that counts, but that’s where my brain went.

I’m a big music fan, so I’ve met a lot of musicians, though I’m sure most of them wouldn’t remember me in particular. I’ve met Filter, Breaking Benjamin, Matt from Vertical Horizon, Clint Lowry from Sevendust and Atomic Tom, to name a few. I’ve woken Bubba the Love Sponge up on his tour bus at 4 o’clock in the morning (that sounds a lot dirtier than it actually was). And John Hargrave of Zug.com/Computer Stew once kissed me on the hand like a perfect gentleman.

SG: What’s your favorite thing about the Gallery?  Don’t lie!

CR: Celebrity Feet. Because I have a weird obsession with feet. I have pictures of my own feet on my phone RIGHT NOW. Editor’s note – she wasn’t kidding.  Look down below.

SG: Plug what needs plugging.  Your site, your profiles, your Russian Bride site, whatever you got.!

CR: Excellent! Go visit my blog! DO IT NOW! (Techno-Geek Nerd Princess!) Follow me on the Twitter! (@Kchiki) Or circle me on Google+! That’s where most of the action is.

Also, if you are of the female or metrosexual variety, or you have a female that you want to impress, buy her something I made on Etsy! (http://kchiki.etsy.com) I think that’s about it.