The Best Luky Sherman Interview in the World 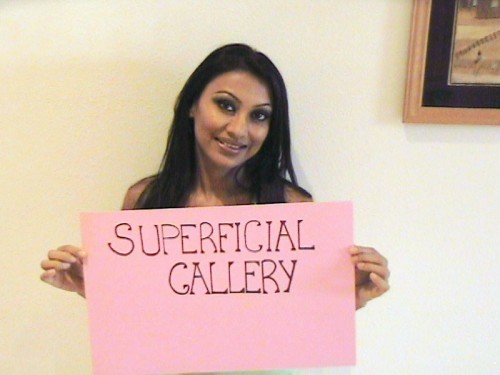 Please note she didn't even say she "loved" us. I guess she just likes us as a friend.

OK, in a weird twist of fate I am batting 1.000 with asking models from Google Plus to do interviews.  This one is from Model AND AUTHOR Luky Sherman.  And no, I didn’t spell her name wrong.  And yes, some of the questions are the same ones from the other Interview from this week but what do you want from me?  I didn’t think they would both say yes.  But Luky did a sign pic so she is one-upping everyone so far.  Read the scintillating interview after the jump!

SG: So you grew up in England.  Are they as fat as Americans?  As a follow up, do you have any pie?

LS: No, they’re skinny. Everyone criticized Princess Kate for being  underweight and skinny leading up to the royal wedding, but that’s how everyone is over there. Her build is the typical English girl’s build. And remember Paul McCartney back in the 60s? Well, he’s the typical English male.  As to the pie question, yes I have pie: one is attached to my body and the other is sitting on my kitchen counter. Apple, I think.

SG: I think one of the most fascinating things on your G+ profile is the fact that you were in an arranged marriage and got of it. Do you think it would have turned out differently if the guy had been awesome?

LS: Sure it would have. I mean, if he had looked like George Clooney when he was on that soap opera or Tom Cruise when he slid across that hardwood floor in his sock and undies, sure, I’d still be with him and loving him everyday. I also never would have been a writer, which means we wouldn’t be having this interview, which means G+ wouldn’t even be on my radar.

SG: You are a model AND a writer.  In today’s times of high unemployment, don’t you think you are being pretty greedy having TWO jobs?  What if you could only have one?

LS: Maybe. LOL. But someone has to do it. Someone has to be brilliant and sexy and write witty things all the time on Facebook and Twitter and G+ and write cool tell-all memoirs about her growing-up-Muslim past in the UK and about her forced marriage to a man old enough to be her father and her awesome luck at winning the visa lottery for America, which got her out of that shithole village and away from her evil mother-in-law. Right?

LS: I think G+ is a glorified version of Twitter. But I like G+ more because it’s so much easier to network and get to know people. And you get to use more than 140 characters, which is great. I mean, 140 characters isn’t even enough to burp in.

SG: Do you get to go lots of fancy places for modeling?  If so, discuss.  if not, discuss the crappy places you get to go.

LS: Sometimes. But more often than not you’re in these weird places, like way out in the woods in the middle of freaking nowhere, in no-man’s land, and there’s ants and bugs all over the freaking place, and it’s hot and you have to change behind some bushes, and then you hear something rattling around in those bushes and you’re thinking, “Oh, shit. What’s in there? I hope it doesn’t jump up my fanny!” (just a note: in the UK, fanny means vagina).

SG: What are your goals (other than being on superficialgallery.com that is)?

LS: Actually, that was never one of my goals. I’m being forced at knife point to give this interview. just kidding! Well, now that my first book is published, my goals are to spread the word and get my story out there and hopefully sell lots of copies while at the same time giving people a great read.

SG: Favorite Movie, TV Show and Website and why! (I snuck in a few extra questions in that one).

LS: Indecent proposal, Desperate Housewives, Craigslist. Believe it or not, I spent an hours trying to exactly why I like those 3. A friend pointed out that’s it’s because they all have to do with sex and money. lol

SG: What’s your favorite part of Superficial Gallery?  I’ll wait while you go to look at the site and find something.

SG: What’s next for you?  Anything you want your new fans to do?  Plug away!

LS: Well, as soon as I get back from the UK, I’ll be promoting my book, Bengali Girls Don’t, rather heavily.  Right now it’s available at Amazon.com and Barnes and Noble.com as an ebook. It can be read on a Kindle  Nook, smartphone (e.g. blackberry, android, iphone), tablet (e.g. ipad), or PC. All that’s needed is the free Kindle or Nook app, which can be download on the same page that you buy the book from. The print version will be out shortly.

SG: On a scale of 1-10 with 10 being Frost/Nixon and 1 being me asking for extra honey mustard at a drive through, how good is this interview?

LS: I’d say a 10! It was fun! Like jumping into that pool of multi-colored balls at Chuck E. Cheese. LOL

SG: Add in anything you want!

LS: The next ten people who buy my book may get a free foot massage! By the owner of this site, of course! (editor’s note: no)