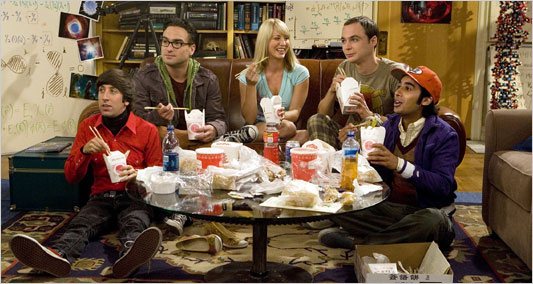 I realized after reading an article on this show in EW this weekend that it is the ONLY sitcom I watch. Literally the only one. I am not one of those “I don’t watch TV” Poindexters, either. I watch it all the time. But usually it is ghost shows or Iron Chef (you terrify me, Cat Cora) or good reality shows. Or stupid ones. Just no middle of the road ones for me! Also, I don’t count It’s Always Sunny in Philadelphia as a sitcom; it is high art.

Anyway – The Big Bang Theory is about some super genius nerd physicists and their super nerdiness, and the hot girl who lives across the hall who isn’t all that hot who is friends with them but doesn’t ‘get’ them. Quite a riveting synopsis, huh? Well, there are a few other reasons why you should watch it.  I am gonna make up some of them- guess which ones!

So, there you have it.  The best endorsement I can give for the only sitcom I watch.  Also the show makes you smarter, cause I think all the geek stuff they say is true.