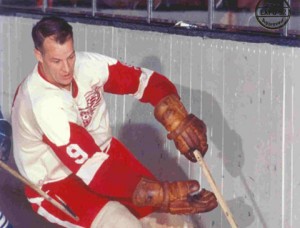 Ahh yes, hockey season has started with a bang. Friday night I was watching the Wings play the Ducks and half way through the third period, one of my favorite players, Pavel Datsyuk, got into a fight and I started throwing my wing nut hat and chanting Gordie, Gordie. You see, Datsyuk achieved a Gordie Howe Hat Trick.

A hat trick is scoring three goals in a game, but a Gordie Howe Hat Trick is a goal, an assist, and a fight, in a single game. This achievement is named after the greatest hockey player of all time, Mr. Hockey himself, Gordie Howe. Gordie is a legendary tough guy who scored goals, a lot of goals. Seems fitting that such an achievement is named after Gordie. Ironically, Gordie himself only achieved the feat twice.

Of course this is not an official statistic and has only been followed for about 15 years and few teams keep tack of the stat. As far as any one can tell, Brendan Shanahan is the all time leader with 17. I believe there was about 10 recorded last season, so it is pretty rare. A neat stat that shows an aspect of a complete hockey player, one who is tough and can make plays and finish.

I have not forgot last nights game or Pavel Datsyuk, winner of the Lady Bing trophy four of the past five seasons. The Lady Bing trophy is awarded to the player who shows the most sportsmanship and fair play in the game. The award goes to a player who can rack up the goals without punching anyone out. Well, so much for that award this year, Mr. Datsyuk.

Datsyuk scored a pretty goal and with a sweet pass got his assist. This is what Datsyuk does, he is a skill player who can skate and handle the puck better then most. So when the game was basically over with the Wings leading 4-0 and ten minutes left, the Ducks got a little feisty and Datsyuk finds himself up against Corey Perry. Perry is an experienced fighter and has about 4 inches on Datsyuk. Well, the little Russian held his own and stood up to him and gave as good as he got. Thats tough right there.