The hell with you Obama 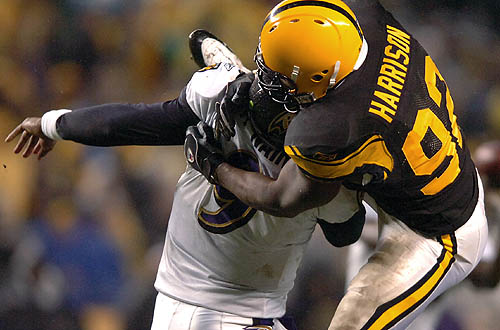 Pittsburgh Steelers linebacker James Harrison will not be going with the Steelers to meet with President Obama tomorrow.

“This is how I feel — if you want to see the Pittsburgh Steelers, invite us when we don’t win the Super Bowl. As far as I’m concerned, he [Obama] would’ve invited Arizona if they had won,” said Harrison.

This ain’t a communist land where everyone gets brought to the white house to have these photo ops. They are special for the WINNERS. You know, to the victor go the spoils and what not. Of course President Obama only wants to meet the team who wins. If Arizona won, then you, Mr. Harrison would be a loser and why would Obama want to shake the hand of a loser? Tell you to keep your chin up and that one day you’ll get there?

Which will probably lead to Harrison straight bustin’ some dudes in the face for making lil james cry, but, still.