The Lions are at least thinking… 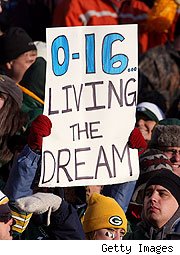 Are they sure Matt Millen is gone?

You might remember a few years back when the Minnesota Vikings forgot to draft a player. They tried to make a trade, it didn’t go down and then they had to pass on their selection. A team passing on their selection when time expires can jump back in at any moment. However, two teams quickly jumped in with their picks ahead of the Vikings.

Now, the Detroit Lions might possibly consider some of that fun.

An interesting concept was floated in the Detroit media last week proposing that the Lions could pass when they are on the clock and then jump back in later and take Stafford or another player a little further down to save money.

Yeah. They want to save money. Which, OK, saving money and still getting the guy that you want is a great idea and should definitely be considered by most teams. Except, most teams usually wind up trading down. It’s a hell of a concept. You could conceivably pass down to a lower position, like the Lions want to do here, AND get a little something in return from the team trading up. It happens, you know, occasionally in any given NFL draft.

The Lions, however, might be the only team in the NFL capable of trading down without getting anything, literally, in return.


In theory, if no one wants the first pick and they can’t get anything back in the draft, passing would be their only way to save money. Maybe consider it then.

However, here’s how it would go for the Lions:

They want Matt Stafford, but want to take him at #4 to pay him the fourth highest salary instead of the first. So, they pass. Then the next five teams rush up and make their picks. One of those teams including Matt Stafford just for the hell of it. So, then, the Lions trade up to get Stafford, giving up a little something in the process.

Finally, Stafford, realizing the Lions would have taken him at #1 if not for them trying to get cute, decides to hold out until he gets #1 overall money.

So, the Lions wind up paying him #1 overall money.

And then everyone continues to make fun of the Lions.