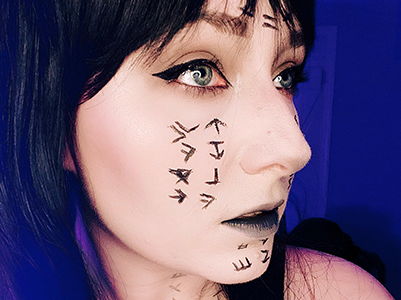 Cosplay 12 of 31 Days of Halloween!! The Mummy Cosplay from the 2017 movie that was pretty um meh….lol
Around the end of August I was still short 5 cosplay ideas and doing a “classic monsters” one was suggested by a twitch subscriber. Due to my headset and time I decided it would be easiest to do this version of The Mummy.

So I used the same black wig I had from last year that also doubled as Morticia Addams so far this year. You can pick on up for around $20 on Amazon. I wore a white tank top and used some gauze from the Lara Croft cosplay to drape around like a mummy. I opted to NOT do the entire bandage booby top because the internet is a pervy place my dudes.

For the makeup I used my pale ass foundation (that yes matches my pale ass face). I did some light contouring of the face and eyes to create some shape out of the circle that is my pie hole. Using black liquid liner for the top lash line and a kajal black liner for the waterline I shaped my eyes ever so slightly pointing them out. Using black body paint I filled in my brows.
For the markings I used a black liquid liner and using a photo from the movie on pinterest I wrote down all the runes on my face and body. For lips I covered them with foundation and then blended black body paint from the center of my lips outward to create a “dead” type look.

This is definitely a very cheap and “easy” cosplay. Easy in the sense that it’s time consuming AF but mostly based on the makeup so if you’ve got the skills go with it!!

A lot of people ask why I don’t wear contacts. Please understand to PROPERLY wear contacts your eyeball needs to get measured by a doctor. You should never just by “one size fits all” contacts. These are your eyes…protect them.

Hope everyone had a freaking WONDERFUL Halloween…x0x0 Beta

Filed under: cosplay, The Mummy