The Only Thing I'll Say About the Golden Globes 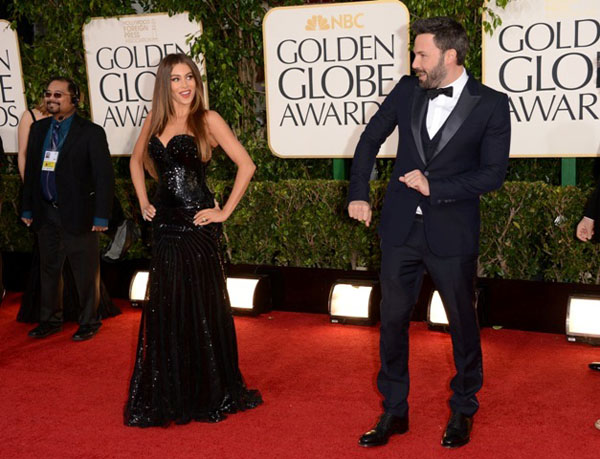 I didn’t watch the Golden Globes.  I don’t watch awards shows very often because I am not invested enough in whatever the awards are for to really root for something.  I wanted the second Batman movie to win and they changed the rules for Best Picture at the Oscars because of it but it didn’t win.  I think the last time I watched before that was when Clint Eastwoon won for Unforgiven and that was like, 30 years ago.

So why do I care now?  Because of that picture up there.  I don’t care how fancy Ben Affleck is now or how many kids he has with Jennifer Garner (12) or what a good director he is.  Dude made what many people think was the best movie of the year and yet they put him next to Sofia Vergara for two minutes and he is reduced to doing some sort of doofusy jig.  I am not sure what kind of power this chick has, but I am pretty sure she could make The Dali Lama do that AAOOOHGAH thing with his eyeballs and hit himself on the head with a cartoon hammer.

So there you have it: big fancy stars acting like idiots.  They’re just like us!  Except they aren’t because they never have to pay for anything and their job is to get us to pay them to lie to us.  Sigh.