The seat is up 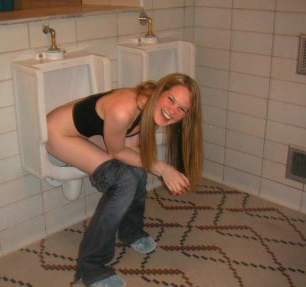 Did you know there’s a list of the top ten most fascinating urinals? Chicago baseball fans are undoubtedly miffed that the long steel trough at Wrigley Field didn’t make the cut. Nothing quite matches lining up with forty other guys; it’s almost a social occasion akin to visiting the ancient Roman latrina. In case you’re wondering, they used a spongia. That’s a sponge on a long stick soaked in vinegar between uses. That’s what the pear shaped opening on the front of the bench was for. The humble urinal has been art. There’s even psychology involved. Ever seen a fake fly imprinted on the porcelain? Studies have proven if you give a man something to aim at restroom cleanliness improves.

Someone has to think about this stuff. Well I mean people other than those who fantasize about the sexiest bathroom fixture. I actually studied the science and history of plumbing. As one of my professors said on the opening day of class, “You can be the best architectural designer and your building will be a failure if people can’t find the bathroom.” Think about that the next time you’ve had six beers and you’re looking for the head. Then pray that they put this sign on the door rather than this one.

The next time you flush or take a bath take a second to think about what the world would be like without these marvels. The bathroom is no longer given over solely to hygiene; it has become a refuge for those seeking purification and it’s the ultimate in beauty and functionality. Okay, I didn’t buy that either. Just thank a plumber that your house hasn’t been blown off the foundation due to a methane buildup from the cesspit in the cellar. Don’t laugh! That used to happen. Your history books never told you that or that the moat surrounding your fantasy castle was essentially an open sewer.

Humans are the only animal possessing the dexterity to wipe themselves after defecation. Of course that took on a different meaning before toilet paper. Mussels were popular in coastal areas and there was the ever popular corn cob. Neither alternative comes in ultra soft, that was the Sears Catalog. When they switched to glossy pages in the thirties, hundreds of people wrote to Sears complaining. The catalog  wasn’t the first book used that way. Lord Chesterfield once wrote to his son with the gentlemanly advice to carry a cheap copy of the Latin Poets with him. One could read it while on the pot and find good use for the page afterward.

Science isn’t always the answer but it was for Sir John Harrington. In 1596 he had been banned from the court of Queen Elizabeth I for spreading smutty stories. He invented the flush toilet for the queen and was allowed back in. Thomas Crapper just invented the siphon flush system but American doughboys saw his name all over the English toilets and brought back a new word to the American vernacular. It’s a better story than how the modern bathtub was invented. John Kohler had bought a cast iron foundry in Sheboygan and the market for farm implements was stale. He put some enamel and feet on his hog scalder and started selling it as a bathroom essential.

The toilet is even involved in politics. Last year, a cold war started on the International Space Station when the United States objected to the fees the Russians were charging for the facilities and locked the door to the US toilet to the Russians. Detente was reached in June when the US toilet broke and the Russians allowed US astronauts to use their toilet. The alternative was laborious. Crew members on the Apollo 7 mission wrote of the experience, “Get naked, allow an hour, have plenty of tissues ready.” The procedure was you taped a bag to your ass, then because you’re in an environment where gravity is not a factor you have to perform a maneuver familiar to dog owners everywhere. Once that was done, you broke a blue germicide capsule in the bag and mushed up the contents.

What is the result in the end? Perhaps simply a devout wish that Superficial Gallery never opens a gallery of celebrities on the toilet.