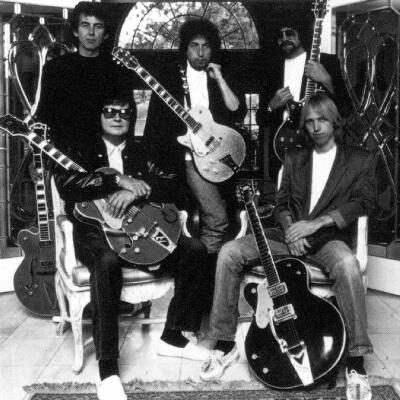 I love Pandora Radio via my Roku box so freaking much*.  It is the best blend of iPod and radio; it plays out the surround sound and provides me with the artist, song title and album.  The logarithm or algorithm or whatever crazy math they use is incredible to me; they base the play list on one artist or song or genre and give you stuff you already know and love and toss in tracks similar enough that you discover new favorites.   My favorite channel is The Traveling Wilburys.  I get piles of Tom Petty, Johnny Cash, George Harrison, Roy Orbison, Dylan and so on.  I haven’t met too many new loves but I am reacquainted with songs I’ve forgotten about.  It is musical Facebook!

Not surprisingly, that channel plays a lot of Traveling Wilburys’ songs.  And they were such an anomaly, such an amazing supergroup, that I am grieving anew the loss of George Harrison and Roy Orbison.  Now, I realize the collaboration was very likely a once-in-a-lifetime event.  But what if it could be revisited?  What if they re-banded with two new members?  Who could fill the shoes of Roy Orbison (the grandaddy of the group) or George Harrison (the driving force)?  I’ve given it some thought; who is that creative, that offbeat and able to blend, ego-free, with this collection of legends and icons?  I kind of think Beck could fill the bill. I wonder if Ben Harper could play well enough with others to make a go of it.  You know who might be awesome (and I know I will get shit for this) but Eric Clapton might be a wondrous choice.  What about Jack Johnson?  Is he too mellow?  Too flash-in-the-pan pop?  Bruce Springsteen?  Roy Orbison thought enough of him to include him in The Black & White Night.  This is hard!

You know who is an easy elimination though?  John Mayer doesn’t even get to be considered.  He is way too much of an immature pussy hound dbag to even be considered for such an honor.  If only stupid death hadn’t taken Warren Zevon decades too soon, he would be such an obvious choice!

poll by twiigs.com
Edit:  FUCK, I FORGOT ELVIS COSTELLO!  AARGH.  Consider him a write-in candidate!
*My awesome 8GB iPod and my Pandora playing Roku box were both gifts  from Acadia in appreciation for being the most awesome gallery partner in the world.  Don’t tell him I would do it anyway–I love it when musical goodies show up in my mailbox!
Filed under: Beck, george harrison, jeff lynne, johnny cash, Music, pandora, roy orbison, Tom Petty & the Heartbreakers, traveling wilburys