The VMA’s Recreated by JW 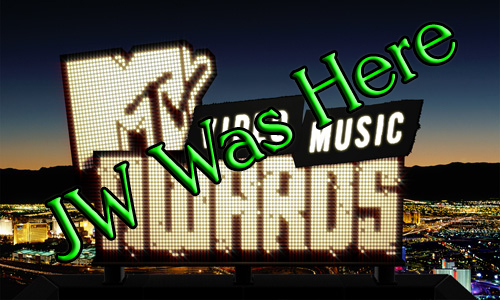 On MTV.com you can now watch last Sunday’s MTV Video Music Awards via a chopped up, “on demand” service. I wanted to watch it because it’s something i’ve always done, from the late 80’s with all the leather and hairspray to the early 90’s when the music they played was wide open to the early 2000’s when the shows were basically either directionless or the network went all in on one or two stars. Every year a network that plays almost no videos puts on a show seemingly because they have to out of some tradition they once held before the last relaunch. This year’s show was neither here nor there in terms of entertainment; really a show you would only watch if you liked someone that they chose to feature.

But that’s not why I am writing this. You see, when I watched the VMA’s, the first thing I wondered to myself was not whether the quality of today’s music was great or horrible, but how much better the show would have been if the channel actually played more videos. Music right now is pretty amazing, yet you wouldn’t know it if you saw that show. MTV presumably slowly went from all music videos to reality shows because they either could only make a capped amount of money within that setup or because they went through a long, pronounced drought of not having an act that they could build around. Everything changed for them because the public changed how they bought (or didn’t buy) music and it was easier for the channel to just create their own culture than trying to figure out what the audience liked. There won’t be a big star unless a conglomerated major label dumps enough money into them to get that song on every ringtone and advert it can, because MTV is only hand picking people who fit directly into what demographic they want to grab cash from. MTV doesn’t need music anymore; they don’t have to receive a ton of videos from mainstream to unknown acts and throw them all on the air to figure out what the audience deems to be great. MTV just chooses what works within what they are trying to do and then makes them famous. It’s like hitting the lottery to record labels when this happens and it’s because the label’s system of how to break an act is flawed and outdated. Sure you didn’t like the Ke$ha song – it doesn’t matter because by turning on your TV you will hear it until enough people tweet about how bored they are with it. Then it’s gone.

The weird and somewhat sad part about this is because as I said before, music right now is very very good. There’s a lot out there and You Tube is now the MTV that you remembered fondly. The idea of a music video has changed from something that an act has to make to something that an act can be free with because any promotion is good promotion. From this, bands and acts make interesting videos without constraints and the music is done without a lot of meddling outside hands in it. There’s an underground but the difference now is that in 2010 the underground is right in front of you if you know where to look.

I’m not alleging that MTV should go back to playing music videos 24/7 anymore; in fact the current setup of I-Tunes and You Tube works a lot better for the exact reasons I explained above. BUT, if the VMA’s really wanted to showcase music that was current and popular they could do wonders with what is out there. The musicians would profit from it, the public would profit from it and i’d bet that MTV would profit from it at least on good press alone. MTV doesn’t need music but if they decided to let it back in once a year they could use their power and audience to further a culture that sometimes feels left behind because they have no starting point.

Here are a few bands and acts that are current, that have albums on I-Tunes, free downloadable songs on blogs and play big festivals like Lollapalooza and Coachella. Click on the links and go hunting for their stuff:

WAVVES: You may have heard of this band already, as within two short years they’ve released two albums, went from next big thing to backlash to second album. Imagine if Nirvana decided to use the Beach Boys as their pop influence rather than the Beatles. The first video is from the first album, the second video is from the follow up, which proves that success and some added money can be done well musically if you use it right.

Best Coast: One girl, one guy. It sounds like 60’s girl groups played through fuzzed out guitars. When people say they like pop music and they quickly validate that by saying “not like Justin Bieber” they mean stuff like this.

CocoRosie: Haunting DJ, ultra production R&B. Amongst the most beautiful voices alive right now. Listen to it when you’re alone in a dark room.

Sun Araw: Trippy, sometimes dark sounding, dub influenced music made buy a guitarist and a guy with a rigged out laptop. Listen to it when you are impaired. The video by the way is fan created.

Bugs and Rats: Noisy rock band that sounds like playing your Led Zeppelin songs while in the midst of a 4 car pile up.

Jesus Christ (The Indie Band): It’s dance music; maybe club like dance music. But different. Odd. Off Kilter. I myself know nothing more about this than this one song, but I can’t stop playing it.

Jesus Makes the Shotgun Sound: Electronic music made by people who also like to play guitars. Spacey, epic sounding. May remind some people of Jesus and Mary Chain or Radiohead.