The Walking Dead: Here is Not Here; or, Morgan's Excuse for Acting Like Travis 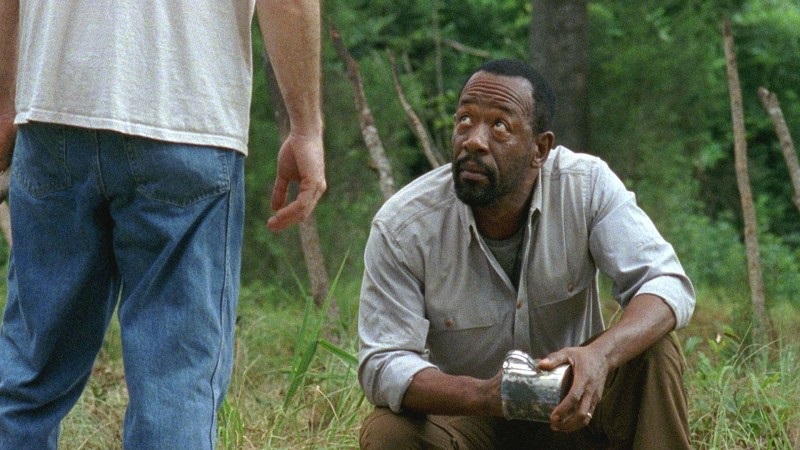 So the writers really want us to understand that they are going to show us a flashback about Morgan. They start with an opening scene labeled “NOW” and then have Morgan go on for a minute about how he is going to tell “every last bit”. We don’t know who he’s talking to at this point and I for one didn’t really care yet. Just get on with it, Morgan, explain why you are acting like Travis.

First we get a bunch of Morgan acting crazy. Like so. 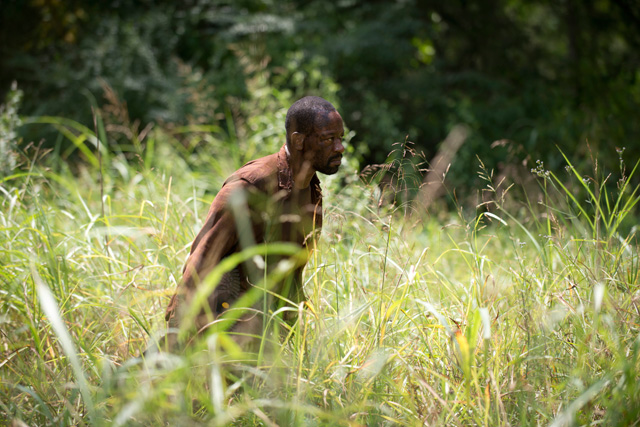 We seem to be picking up here shortly after Rick and Michonne’s last encounter with Morgan, where he was holed up in a building acting bananas. (You know, when Michonne stole his power bar.)

So there’s lots of Morgan running around like this, mumbling to himself, killing and burning zombies, and also killing people. He kills two people who seem to mean him no harm potentially. Throughout, he keeps mumbling about and writing things like “Here is Not Here” and “Clear” and “Pointless Acts” on trees, rocks, etc. We get it, you’re wackadoodle. Move along in your story line, guy. 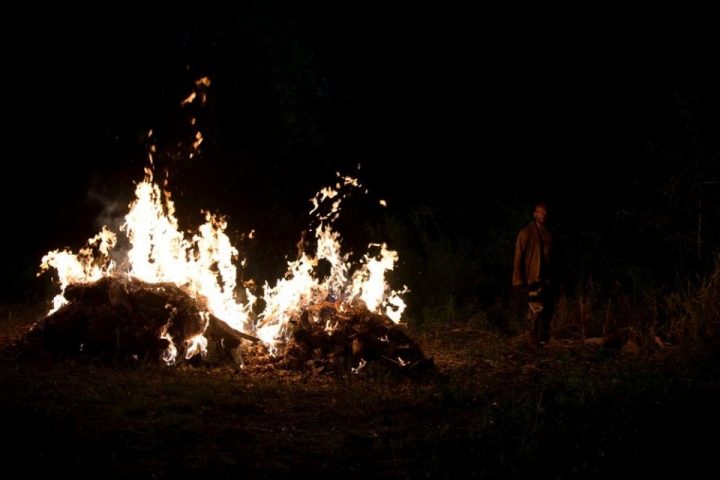 Finally something less annoying is about to happen. Morgan gets to a big open clearing with pretty purple wildflowers in it. He gets very agitated and says something like “You know what it is” and waves his stick around – it’s a spear really, with a sharp end that he uses for killing zombies and people at this point. Because he’s not a peaceful Zen warrior yet. I don’t know what any of this is supposed to illustrate except that he’s still crazy.

Then he follows the sound of a bleating goat to a cabin in the woods where a voice asks him, “Can you step away from the goat? She doesn’t belong to you and I still need her, I haven’t figured out how to make cheese yet.” Morgan pulls out his rifle and shoots in the direction of the speaker, who ducks and moves. He calls out again “Put the gun away and we’ll talk. I have some falafel. Looks like you haven’t eaten in a while.” 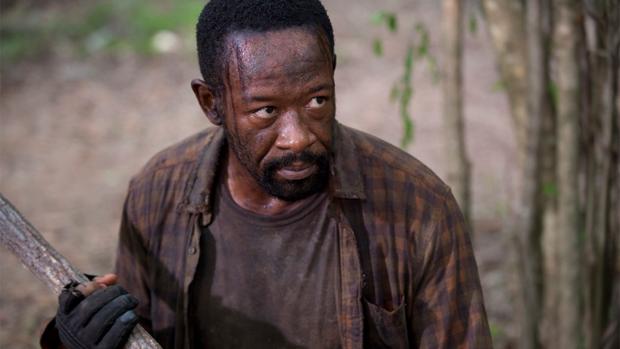 Morgan’s predictable response is to act like a crazy paranoid person, creeping around, trying to get in the cabin. He gets another warning and then he gets knocked the eff out. Which, honestly, is satisfying at this point because so far Morgan has done nothing to make me like him this episode.

It should of course be obvious at this point that this is going to be the peaceful guy who lays some Zen wisdom on Morgan that makes him turn into the kind of person who even refuses to kill Wolves, who are brutal butchering lunatics. You better lay it on pretty thick, guy, because I don’t think you’re convincing me. That’s what I thought to myself at this point.

He keeps Morgan in a cell in his cabin. He goes around doing various saintly peacable things like fixing Morgan food, giving him a book to read called “Art of Peace”. We learn his name is Eastman. He has a goat named Tabitha, which is endearing, he is bad at making goat cheese, he doesn’t eat meat. We get it, Eastman, you are a NICE GUY.

Here are some important moments I want to discuss:

Kill Me. When Morgan first wakes up, Eastman asks him his name. He starts shouting “Kill Me! Kill Me!” in a predictably insane manner. Eastman’s response is “That’s a stupid name, it’s dangerous. You should change it.” I like that he has a sense of humor and he basically calls Morgan an idiot here.

Tabitha. When Eastman puts Tabitha inside for the night in the same room with Morgan, he says “You shot at me, I fed you. Please don’t hurt her. Goodnight.” I am a sap for animals so I like that the guy has given her a sweet name and that he’s just trying to make cheese, he’s not going to butcher her. I like that he keeps gently telling Morgan not to be a d$&%.

When Eastman tells Morgan he’s full of crap. Morgan explains to Eastman that he kills everyone who comes near him, walkers, people, everyone. He calls it “getting clear”. And that this is the only reason he’s still alive. Eastman tells him “That’s horse$#%@” and gives him his lunch. Oh hey, Morgan, remember all the times living people helped you, you dunce? Like, you know, Rick? Yeah, OK. Just checking.

When Eastman Almost Gets Me On Board. He explains, “We’re not built to kill. We don’t have claws, or fangs, or armor. Vets who come back from war with PTSD don’t have it because we’re comfortable with killing. I have interviewed over 800 people and I have only met one truly evil person.” Of course more is coming up about the Truly Evil Person that Eastman has met.

When we find out Eastman did in fact starve his family’s killer to death. Dayum, I didn’t see that coming! When he first mentioned it he finished the story without directly answering but I assumed he had decided against it. But apparently the watching the guy starve to death slowly is what made him decide that all life is precious. “It took 47 days, and then I was gone. I was where you were. And I wasn’t trying to open the door anymore either. What I did to him, it didn’t give me any peace. I found my peace when I decide to never kill again. To never kill anything again. When I decided to settle things I went back to Atlanta to turn myself in. That’s how I found out the world ended.” “The world hasn’t ended,” Morgan says. “Progress,” says Eastman.

Eastman telling Morgan he’ll hold a baby again. Oh snap, just about 24 hours ago in Morgan’s world he did in fact hold Judith the baby. So that makes that moment more meaningful in retrospect. 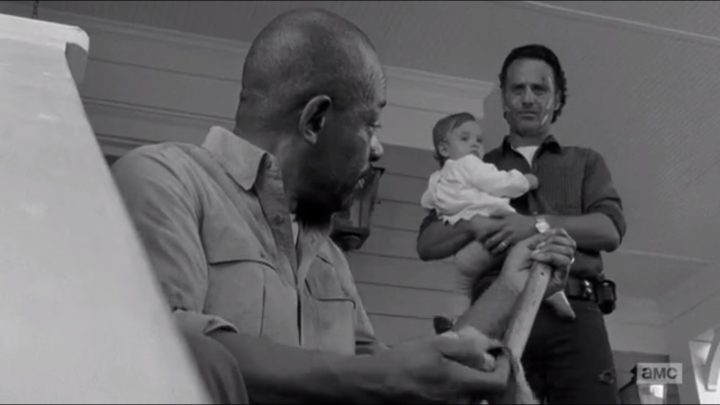 I hate, but could have predicted from the second we met poor Eastman, that Morgan would be his downfall. Of course. Because Morgan spaces out when they are on their walk out in the woods to Morgan’s old zombie-burning field, Morgan spaces out and can’t kill a zombie because it’s the walking dead version of the living human guy he killed before finding Eastman. Because he sucks and is terrible. Then of course Eastman saves him and gets bitten because that’s what we know was going to happen all along, basically. 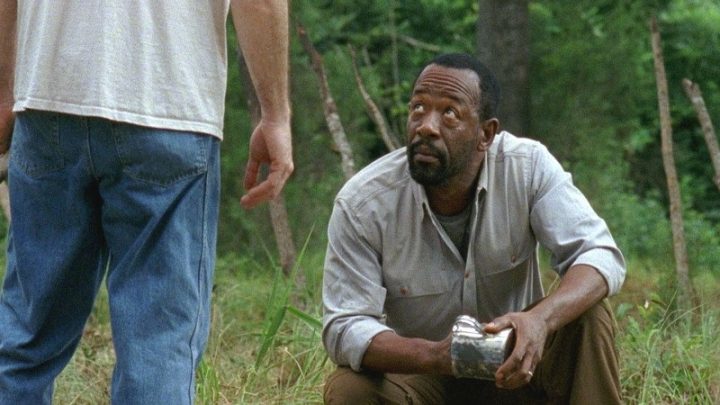 And of course, while they were out on their little walkabout, Tabitha the goat got out and got eaten. Because that’s what happens to anyone that hangs out with Morgan I guess.

I get that this back story makes Morgan’s “We don’t have to kill” theory more poignant. I get that he feels loyal to what Eastman taught him, but I am still not on board. Because the lesson Eastman should have learned from starving his family’s murderer to death is not “We shouldn’t kill” but “we shouldn’t torture and be horrible monsters”. Crighton Dallas Wilton was a true psychopath and never going to do a lick of good in this world. And now that it’s the apocalypse, especially, you don’t keep people like that around.

Of course, to bring this point home, we wrap up with a flash back to NOW, and Morgan has finished his story, and the stupid useless Wolf he’s telling it to basically says “yeah great well I was bitten by a walker and I thought you dummies might have some medicine but just so you know if I don’t die soon I’ll kill everyone here including children because I’m a crazy person and that’s what I do now so you know, thanks for letting me kill everyone.” Smooth move, Morgan.

He appears to have the guy locked up, maybe where Rick first locked Morgan up for a while when he appeared, to make sure he wasn’t a danger. The guy’s teeth alone are a reason I need him to die soon. I can’t look at those anymore. Is he slathering sugar on them daily to make them that disgusting? Horrifying.

As he walks out we hear someone, I assume Rick (all internet speculation agrees with me) yelling “Open the gate!” We can assume he is arriving just head of a zombie horde/herd, possibly having to literally outrun them from his bad situation in the broken RV. Can someone find this man some effing sneakers? Or does he have to run in cowboy boots forever because he’s a cop in the south? 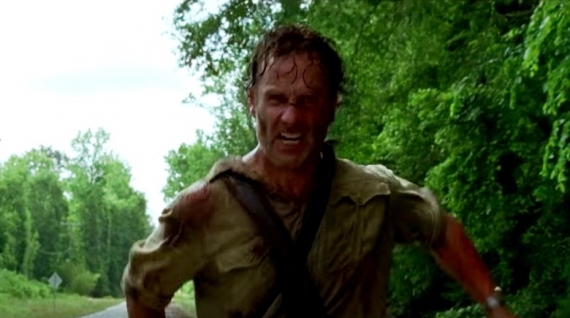 By the way, the “Here is Not Here” thing is kind of flimsy, if you ask me. I get it that Morgan mumbled about it and wrote it on rocks, and then, after Eastman got bitten in Morgan’s old circle of death Morgan says to him, in frustration, “I said, not here!” and Eastman says “That’s the thing, Morgan, here is not here.” But that’s just all annoying if you ask me. It has no real meaning and it’s just trying to get a memorable catchphrase into the episode.

What do you think? Come back every week for more Walking Dead talk! And leave your comments below.