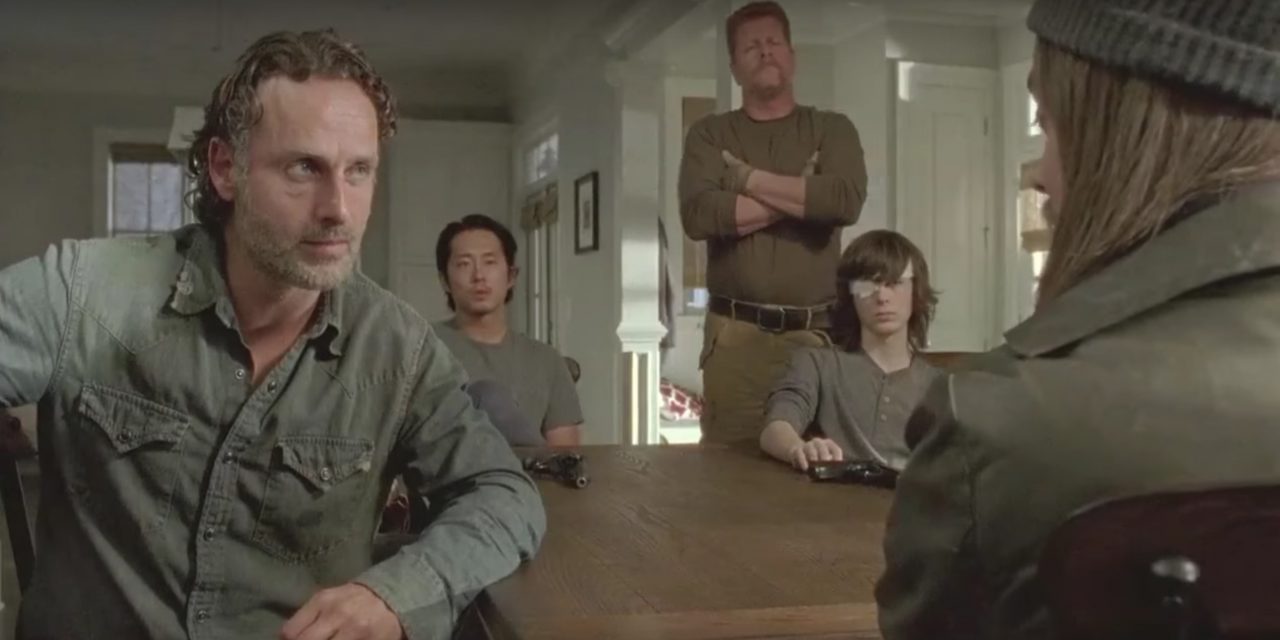 First of all, I’ll post all comic spoilers at the end so you can skip them, but I will tell you that many events mirrored the comic almost exactly, and even exactly in some cases, which is pretty cool and exciting for a nerd like me.

So let’s get right down to it.

It appears that Jesus isn’t a bad guy, because he didn’t kill anybody when he had freed himself and was creeping around their town at night. So everyone gives him a chance to explain himself and what’s going on. 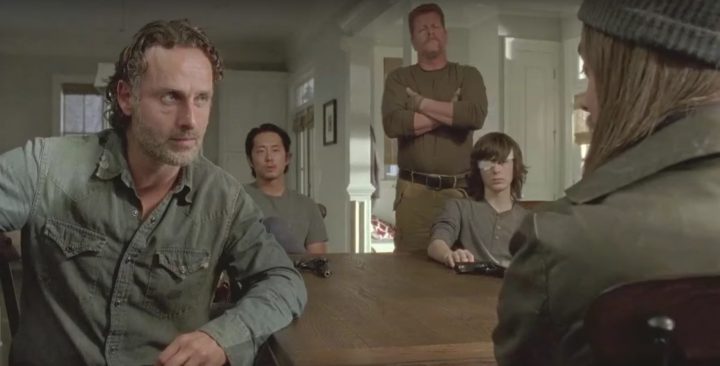 When he tells them he’s from a similar town and proposes that they work together you can see everyone kind of being floored. They had mostly given up on the idea of anyplace other than their little town existing, it seems like. They had decided they could make a good life in Alexandria, and go out and recruit people as they chose, and that was that. It must be scary and also hopeful to think about the idea of a potential actual return to some form of civilization. 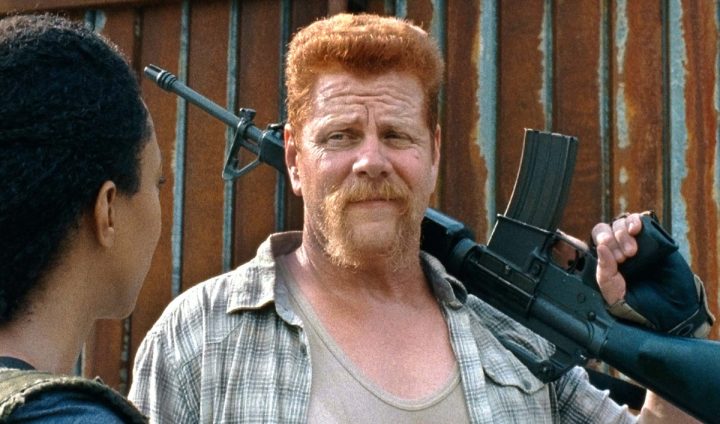 On the way to Hilltop

We learn that literally nobody other than maybe Rick and Daryl are capable of driving a vehicle, because they find a crashed car belonging to some of Jesus’s people (It crashed because there were roughly 7 walkers around? you can’t just, drive around those? Yikes.) They are super suspicious of Jesus at first but he seems genuinely scared, so they rescue his peeps while Maggie waits with a gun on him, and now they have more people grateful to them for helping.

Abraham creepily asks Glenn about whether Maggie is pregnant on purpose in a way that makes me never want to eat pancakes again. I don’t even want a baby in the regular world, so I get your opinion, Abraham, but keep it to yourself because it’s moot, Glenn and Maggie are happy, just hush your face. 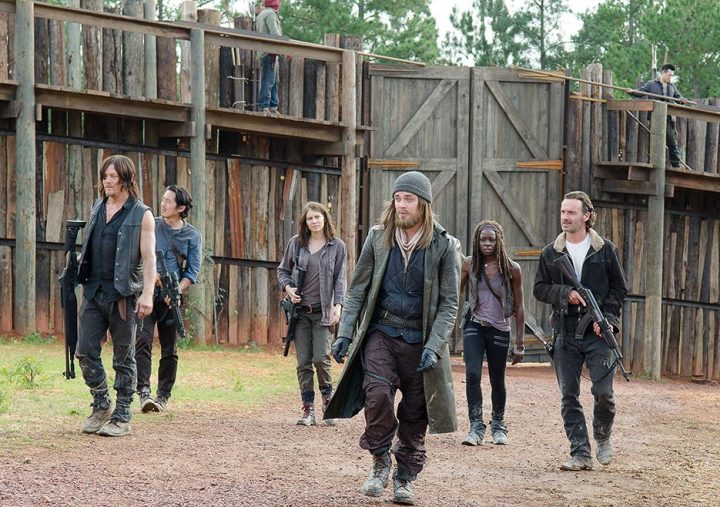 The compound looked smaller than I expected it to, honestly, based on maybe partly my reading of the comics but also based on the relative size of Alexandria, or at least the impression I have of the size. The things that strike me right away are probably the same as what strike other people – the guards at the gate have spears, not guns, and Jesus seems derisive of their need to even stand up there, saying something about how they do nothing all day. Some foreshadowing maybe for the info we don’t have yet about The Saviors. We get it that the Hilltop folks aren’t very good at fighting or protecting themselves. But they do have livestock and a lot of food, which the Alexandrans (?) need.

We meet Gregory, who we immediately learn is an utter a$$hole. I guess he’s not supposed to seem evil, but he certainly is unpleasant. He won’t talk to anybody before they wash up. I like how Rick is like, “We’re fine,” as he’s standing there all disgusting and filthy with everyone else. Luckily it’s not too long before he (Gregory) gets his just desserts.

He’s a gross sexist to Maggie, as far as I can tell basically insinuating that she should whore herself to him, I guess? with his creepy “I’ll make it worth your while” comment. He basically tells them they have to put in shifts working in the town to get anything, which Maggie is not keen on, and they are at an impasse.

Of course it’s not long before Rick is covered in blood and looking terrifying in the middle of a new town again. 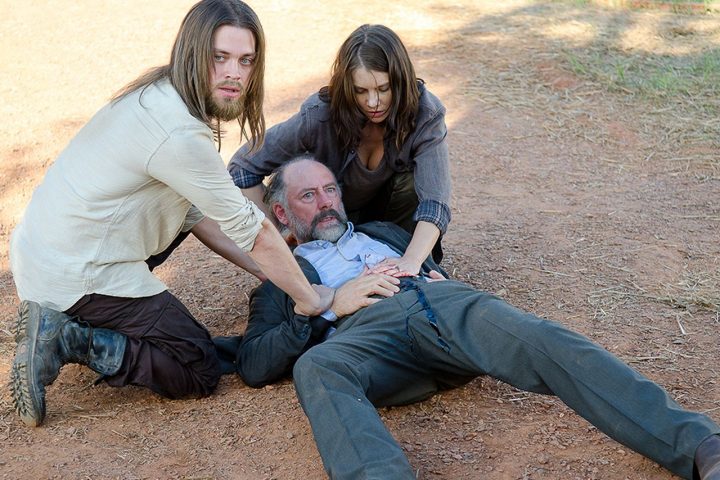 When the people that Hilltop had sent out to bring a delivery to Negan return with bad news, and a stabbing to the gut for Gregory, Rick et al spring into action, quickly subduing everyone and killing the stabber, at which point Rick, terrifyingly covered in blood (awww, and just after he “cleaned up” too) looks around pointedly and says, “What?”

I also enjoy the moment where the guard tells Rick to put his gun down and he says “I don’t think I will.” 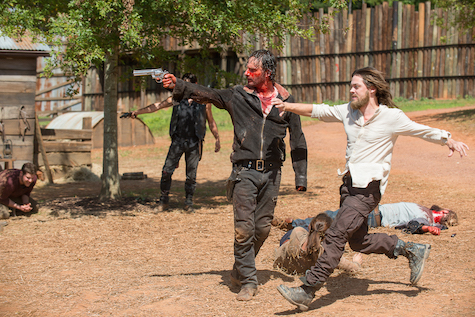 Jesus stops further violence by pointing out that it only happened because their own person stabbed Gregory in the first place. I do like how handily they take everyone down, making it clear they are badass while most people in town are total weaklings who can’t do anything involving violence. And thus their usefulness is discovered.

Jesus explains the situation Hilltop is in with Negan, and it is quickly decided that the best deal everyone can make is that Rick and his people will take out Negan and The Saviors as their “work” to earn food and supplies from Hilltop. Maggie negotiates hard and gets a lot of initial supplies out of Gregory. Good work, Maggie. I do like that they’re setting her up as a smart leader, which was started with Deanna kind of christening her as her successor in Alexandria.

While I immensely enjoyed the group’s braggadocio about how they could obviously easily take care of Negan (I was waiting for an eyeroll, honestly), it made me extremely anxious as well. They haven’t seen Negan’s group yet, don’t know how many of them there are, or anything else about him really. Daryl lucked into barbecuing them because he happened to have a rocket launcher.

The anxiety is further intensified when we see Glenn and Maggie looking at their ultrasound and later passing the picture around for everyone in the RV to smile at. WHY YOU GOTTA MAKE ME SO ANXIOUS, GUYS?

What did you think? Anything you really loved or hated? Any theories about what’s going to happen next? Leave your comments below!

First of all, here’s a great article which matches up the comic panels with various scenes in this episode. Really very true to the original, which I love.

I am so far ahead of even these moments in the comic, though, that I actually forgot that Gregory was this awful right at the start. Although he gets so terrible down the road that he actually tries to kill Maggie, and of course gets his ass kicked by Jesus and then is hung by the neck till dead by Maggie when she’s running Hilltop, I really didn’t remember that he was so off-putting this early. Welp, it certainly removed any sympathy I might have had for him. As soon as he started creeping on Maggie I was like “That’s OK, pal, someday she’s going to literally kill you so, you know, enjoy it now.”

I continue to think that they show is doing an excellent job with Jesus. He seems to quickly get what Rick and his crew are about, that they’re both good people who truly care about each other, and also battle-tested bada$$ killers who aren’t scared to throw down. Also, of course, knowing how important Jesus is for the rest of the series I love seeing him develop at this point. It kind of kills me that people who are only watching the show have no idea who is good or bad still and what’s coming.

And oh sweet baby jebus, could they rub it in any more about Glenn and Maggie and the baby? I mean, yikes. I assume Glenn is going to meet the same end he does in the comics, though I think it won’t be till the very last episode of the season, so you’ve got a while to continue to enjoy the bittersweet foreshadowing.

I also was remembering, when Carl made a point of staying behind because of his eye, how his eye is played up with Negan in the comic, with Negan telling him not to cover it and to be proud of it, and how Carl is a total bada$$ who shoots up a crapload of Negan’s men before he is restrained. I also think the Carl in the comic is younger than the Carl in the show when all this happens. I feel like’s he’s still really a kid, which makes him even more bada$$. I expect a teenager to unwisely rush into danger, but a kid? Wow, Comic Carl, respect.

And lastly, I’m just throwing this in because it’s true and hilarious, even though it’s from the first half of this season. 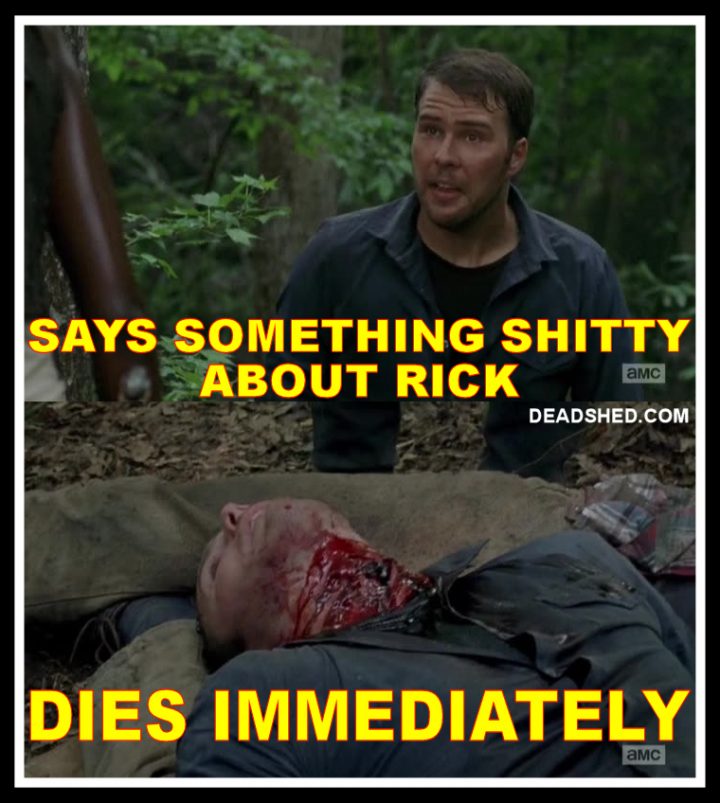