The Walking Dead: The Next World; the good, the bad, the ridiculous 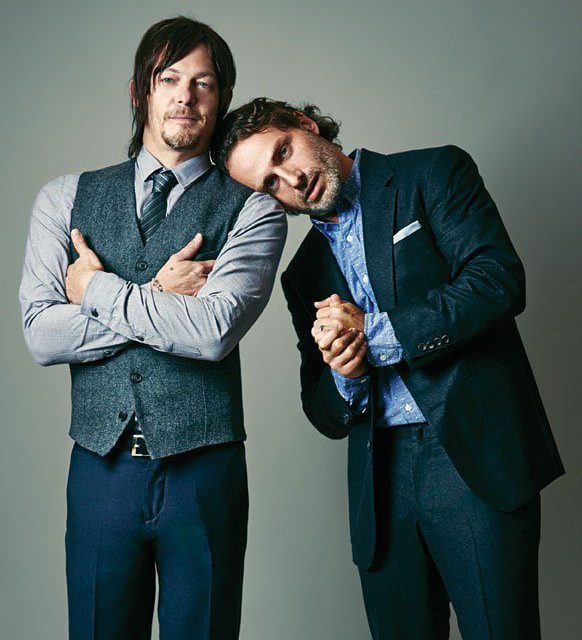 OK so I’m sorry I missed the recap for episode 10, I had started preparing it but I had trouble posting it and then I went away for the long weekend and I wasn’t going to sit down in the middle of vacation and do work. #sorrynotsorry Acadia.

So here we go – a very important character was introduced this week, Jesus. Having read the comics all I want to say so that I don’t spoil anything for you, is he’s important. I like how they’ve presented him so far. My only complaint would be the actor playing him is more slight than I think the character in the comic is presented, in my memory he’s more of a hulking guy kind of, not like The Rock, but I think he’s taller than Rick and a lot of other members of our main group. In any case, that’s my only gripe with the casting.

I think Tom Payne is doing a great job so far and I look forward to seeing how the show handles his character development.

Now I know some people were annoyed by the Daryl and Rick chasing adventure that took up most of this episode, and there is an entirely hilarious “Benny Hill” version of a particular sequence that I have to agree is basically perfection. But despite the silliness of that chase scene, I liked the tone of their outing.

I liked that they seemed to comfortable together, that Rick seemed to be more laid back and less angry and tense, that they were kind of bickering over music in the car, etc. It was a nice comeradarie, and a break from the kind of horrible events of the previous episode. 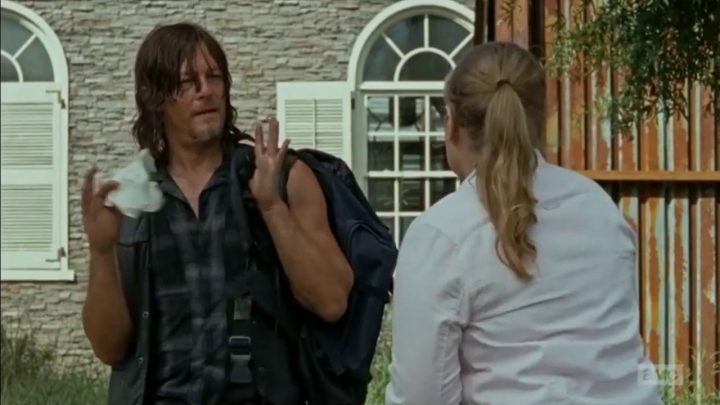 I also sincerely loved Daryl trying so hard to get soda for Denise to give to Tara. Daryl always gets me with these sweet gestures, like when he searched high and low for Sophia for Carol and was the only one who didn’t give up, when he was kind and thoughtful with Beth, and how heartbroken he was when she was swiped. I also like that he hides it and acts like it’s no big deal but it’s obviously super important to him. Oh, Daryl, you old softie. 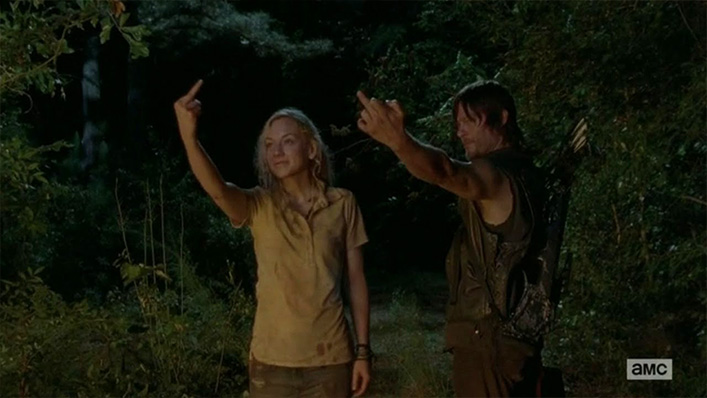 There are also some cool things pointed out in this article (warning, some spoilers from the comics) like the shot of Daryl and Rick standing over Jesus with guns pointed being reminiscent of a scene from Boondock Saints, which Norman Reedus starred in.

The other major things that happened were that we found out Spencer has been creeping in the woods because he thought he saw his mom as a zombie on the day everyone in town had to kill all the zombies that got in, and he wanted to find her and kill her. Relevant side note: Carl saw zombie Deanna in the woods with super annoying Enid and was trying to lead her back to town so someone who cared about her could kill her, and he tells Michonne he would do the same for her, which passes for sweet in the zombie apocalypse. Also Enid is annoying as hell. Still. And I have no idea why Deanna was still a walker – she was locked in a room dying and Rick left her a gun to kill herself, and we heard a shot go off. Did she chicken out? Shoot herself not in the head? Lame, Deanna.

ETA: As James Olchak points out below I utterly forgot Deanna’s death scene, so I apologize. She was going to shoot herself in the head but heard walkers out in the wall and started shooting them, trying to help the others who were still in the house. It was pretty B.A. and I should have remembered.

However, I now have to come out starkly against Richonne. Yes, in the comics (spoiler!) Rick is in a relationship with Andrea at this point, so since they killed her on the show, I guess they are trying to replace her. But I don’t think it fits their characters. Yes, Michonne has become very important to Carl and really cares about him so I understand how maybe she could have sort of a parental role. But I have always seen her as Rick’s ass-kicking partner, not a love interest. Not every penis and vagina that are near each other have to have sex, writers. I object. There has also been no flirting or anything like it up to this point, it’s just random and feels very forced. Maybe it will grow on me but for now I hate it.