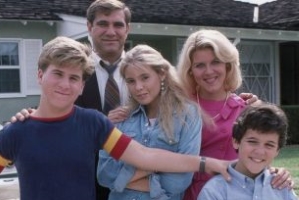 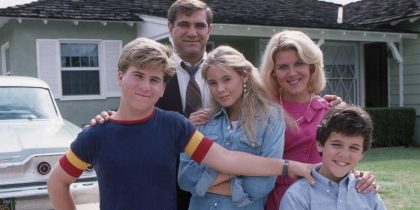 One thing The Wonder Years did well was to show the culture clash between the adults who grew up in the 40s and 50s and their teenage kids in the 60s. “Angel” is the first episode to truly highlight that.

Karen now has a boyfriend: Louis, the radical vegetarian attending the local college. He’s played by John Corbett, best known from My Big Fat Greek Wedding, and the first of many guest stars who will one day be famous. The

couple are always all over each other, much to the chagrin of Kevin. Paul doesn’t seem to mind as much (“So what? She’s not MY sister.”) He tries to protect his big sister from the clutches of the PDA friendly Louis, and discovers he has another girl named Marissa. Here comes another one of those dream sequences, this one Western based where he beats up Louis for being unfaithful to Karen. In reality, he tries confronting Louis, and Louis explains that Karen knows about Marissa and that he “shares love” with both Karen and Marissa. This seems shockingly sex positive for a a family show airing in 1988 that takes place in the 1960s, but more on that later. For the record, Wayne is much more impressed than Kevin that Louis has two lovers.

Louis then meets Mrs. Arnold, and begins asking her if she finds being a housewife fulfilling, since “A lot of women find it demeaning serving their husbands and children.” It gets worse when the family sits down to dinner with Louis. He starts an argument with Jack over the military and the Vietnam War, saying that Brian Arnold’s death was meaningless. It gets even worse when Jack’s time in Korea is brought up, and Louis calls soldiers “brainwashed morons.” Karen and Louis leave after bringing up that if the war goes on much longer, Wayne and Kevin could be the next to be killed.

The episode ends with Karen being heartbroken, since she didn’t know that Louis and Marissa were sleeping together. Looks 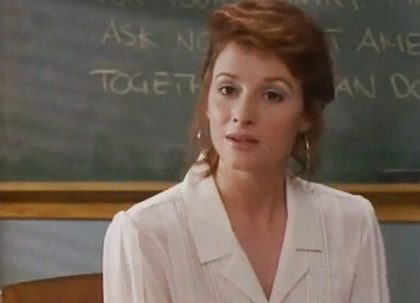 like Louis is just a two-timing dick and not the open minded polyamorous hippie he pretended to be, and we lose out on a shockingly open storyline.