There’s Something in the Air. And it Ain’t Love 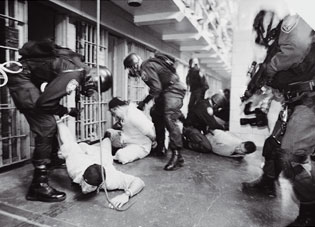 It's shit like this that makes me so glad I don't work in prisons.

CHINO, Calif. – A California state prison near Los Angeles remained on lockdown Sunday after a riot sent 55 prisoners to hospitals and injured more than 250 inmates in all, prison officials said.

The riot was likely prompted by tensions between black and Hispanic prisoners, Hargrove said.

Please, the tension heated up when Dino Ortolani got burned up. Of the 250 inmates injured, 76 of them were injured by an enraged Adebesi who was screaming for some drugs. Kareem Said, the Muslim leader, eventually took control because he was the only one inside the riot with a gun. The damn shame was when the prison priest was shunned by Miguel Alvarez, who he previously thought he had been getting through to. Learning a harsh reality that when a prison riots, you’re all in.

And, if you’d like to read a real article about this 11 hour riot, rather than reading one or two too many references to OZ, click here.