Things You Should Know – Hannibal Hamlin 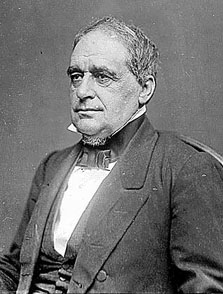 Alliterative names should count for more in politics.

Hannibal Hamlin, ex-senator from Maine, is a good guy to bring up when people are talking about Vice Presidents.  Since Biden is such a doofus and always yapping about shit he should be keeping quiet, the topic is bound to come up at a party.  This will also be handy when people are talking about how much power Dick Cheney wielded when he was VP.  Here are some fun facts about Hannibal.

1:  He was Abraham Lincoln’s first VP.

2:  He didn’t meet Lincoln until after the election.

3:  He was from Maine, and Maine was the first ever state to ‘go Republican’.

4:  He had exactly zero to do as Vice President.  He was so bored, that he joined the frigging Coast Guard. Yep.  He joined the Coast Guard because his duties as VP were zero.

5:  He didn’t get asked to be VP in Lincoln’s second term.  So he went home.  If he had been picked, then there would have been a president from Maine.  But instead – nothin’!

6:  He died playing cards at his club in Bangor.  After his VP gig he went back to being a Senator and was also Ambassador to Spain.

So now you know 6 things about Hannibal Hamlin.  Feel free to work him in when the subject of the VP comes up.  And since his name is Hannibal, you can slip over to talking about the A-Team really easily.  So go knock someone’s socks off with your new knowledge!

Filed under: politics, things you should know