Things You Should Know – The Halifax Explosion 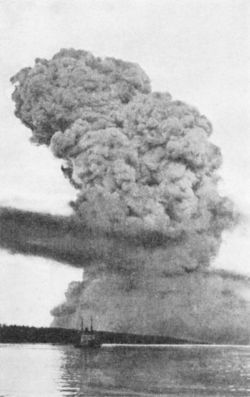 The Halifax Explosion took place in Halifax (derh), Nova Scotia, Canada on December 6, 1917.  It was an accident, and it went down like this:  See, everyone back then was all busy being in World War I.  And Halifax, being pretty close to Europe (in a relative sense) was a handy spot to load up boats with bombs and guns and mustard gas and beans and all the other shit they needed to fight the war.

So there was this one ship, the Mont-Blanc which was loaded up with munitions to bring to Europe and this other ship, the Imo which was carrying relife supplies also bound for Europe.  Unfortunately, the two things did not cancel each other out and when they ran into each other, they created the largest accidental man-made explosion in the history of the world.  And I don’t mean (up to that time).  I mean – ever.  Even now.

The explosion pretty much flattened the town, and the statistics associated to it are staggering (sorry about all the metric system crap – damn Canada!):


If you want more boring details, you can always go to Wikipedia.  But wouldn’t you rather watch the videos after the jump?  Learn all about the Halifax Explosion and be more popular at any gathering!

Don’t mind the fact that the kid does not seem to get that black text does not show up on a black background.

The disaster has it’s own song!

Filed under: canada, disasters, history, things you should know