Things You Should Know – the Boston Molasses Flood 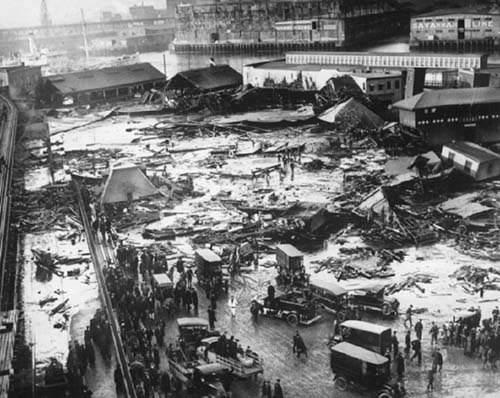 I know it is sad - but it's not like things were that great BEFORE the flood. It was Boston after all.

OK – so please keep in mind that I am giving you these things so that you can sound witty and smart in VERY SMALL DOSES.  If anyone asks you any follow up questions on these, then you need to change the subject quick.  I reccomend pretending to have a seizure or, if possible, actually having a seizure.  Or you can just make some shit up.  How are they gonna know?  Anyway – let’s talk the Boston Molasses Flood.

On January 15, 1919 the Purity Distilling Company in Boston, MA had this big tank full of Molasses.  About TWO POINT THREE MILLION GALLONS of it.  Now, I don’t know what kind of engineering they had in 1919.  I mean, I know they had trains and cannons and the Titanic, but where did they figure they could build something that would hold 2.3 million gallons of anything let alone molasses?  Hell, I bet if you filled one of the pyrmaids with molasses the shit would break open.  Anyway, it broke open (big surprise) and a big wall of molasses flooded Boston.  And fucked up their shit.

The flood only killed 21 people.  I say only cause it was 1919 and I am sure more people in Boston died that day from scurvy or consumption or the Redcoats.  And it is no fun talking about how much it cost to clean up cause it was 1919 and an house cost like, $40.00.  So instead, I will give you some questions to use as conversation diverters, since the whole good part of the story is so short.