This is how you Legislate! 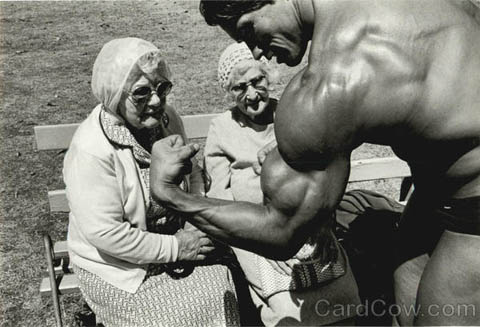 "Guns to knives seemed a normal progression at the time...."

…or Executize, whatever they call it for Executive branch. But, the fact of the matter is, having a big ass knife or sword with you is awesome. It just sends off an absolute vibe of, “I am not fucking around” and Arnold (you know his last name by this point) got after it like that this week in California.

Why in the world is Calif. Gov. Arnold Schwarzenegger seen wielding a two-foot-long knife in a video link posted on Twitter?

In a 27-second clip posted Tuesday, the husky governor addresses the Twittersphere while holding a two-foot-long knife.

I challenge ABC to give me one good reason why he should NOT have a two foot long knife while addressing the people.

The only thing to be pissed about here is that he didn’t say, “THAT’S NOT A KNIFE…THIS IS A KNIFE!” when he opened.