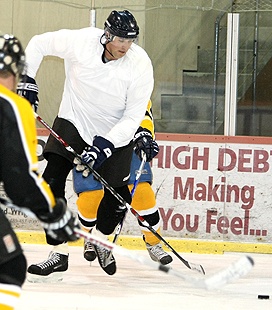 Greg Ostertag is a tall dude. You know this because you have seen him play basketball and were like, “damn, that white boy is big and about to have his shot blocked by a guard.”

Ok, maybe not in the NHL, but in a men’s only NO-CHECKING (read: women’s only) league. He also says he can still ball in the NBA, but I care none for that. He is 7 feet 2 inches tall, I would love to see him playing in the NHL just towering over Crosby and what not. He would be a beast on the power play*