This Movie Scared Me and I am Really Tough! 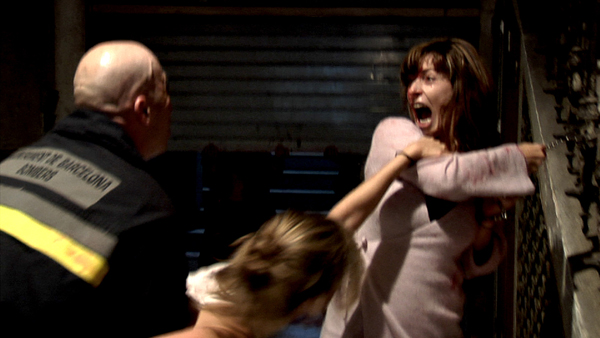 I don’t care what people way about how played out “found footage” movies are or how locked room mysteries are boring of that Spain doesn’t have real firemen.  Rec is scary and if you only watch one scary movie this Halloween season this is the one it should be.  The premise is simple.  A local news team is doing a ride along with the fire department and they get sent to an apartment building.

From there mayhem ensues of course but the whole thing seems..better than you would think.  The shocks are great and the creeping weird dread at the end as they dig through the layers of wtf’ery to kind of set up the creepy creepy ending is pretty effective.  And if you are one of those people who get all cozy under blankets and then fall asleep it is NOT THE MOVIE’S FAULT!  Sit up ffs and pay attention.  There is creeping dread!

And I challenge people to tell me that the ending is not creepy and scary and messed up.  Even if you don’t put all the pieces together as to WHY what happens happens you can at least get the gist of something being really wrong with what happens.  I was legit scared and then later that night after I was done being cool and tough I laid in bed thinking about what I saw and hoping I never saw it for real.  Then I realized that if I didn’t have night vision goggles I would not see it.  But THEN I realized that if I didn’t have the goggles I wouldn’t see anything and that would be wicked worse.

Watch it.  Then come back and tell me what you think.  And if you say you fell asleep we will fight.