This Really Isn’t About Basketball 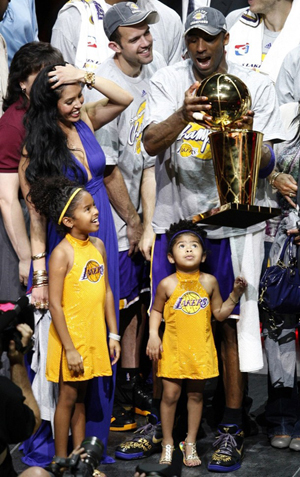 I watched the final game last night and blah blah the Lakers took their 15th Championship title; it was Phil Jackson’s 10th and he had very lukewarm things to say about taking the lead from Red Auerbach.  The thing that struck me the most, though, was after Kobe was awarded the MVP trophy and was asked how he and his family would celebrate.  He looked a little flustered and said, “We’ll let the kids stay up late and…uh…they can have some soda.”  It was such a cute daddy thing to say and it just won my heart.

I like to think it was an unrehearsed and honest answer which made him seem like such a regular guy.  That being allowed to have pop would be a huge treat for his kids who, clearly, could have just about anything their tiny hearts desire.