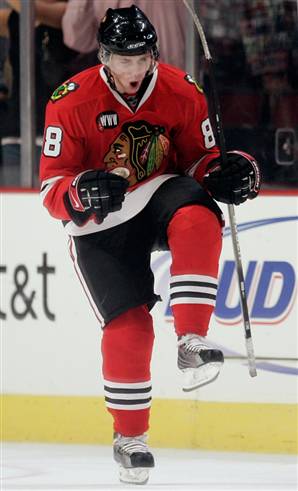 I know the NHL is likely broke*, but is this necessary? Patrick Kane of the Chicago Blackhawks decided when a cab driver wouldn’t break him off his two dimes change for cab fare he would go straight Claude Lemieux on a dude.

The 20-year-old Chicago Blackhawks star and his cousin, James Kane, were arrested early Sunday morning after an alleged incident involving a cab driver in Patrick’s home town of Buffalo.

A report in the Buffalo News said the Kanes paid for a $13.80 cab ride with $15 around 5 a.m. The cab driver claimed he didn’t have the coins to give them the full $1.20 in change. The driver alleges that the Kanes then took the $15 back, punched the cab driver in the face, grabbed his throat and broke his glasses, according to police.

Seriously? And besides, are you not tipping the cab driver?

*The NHL is likely not broke but uh, still, who gives a damn about hockey?