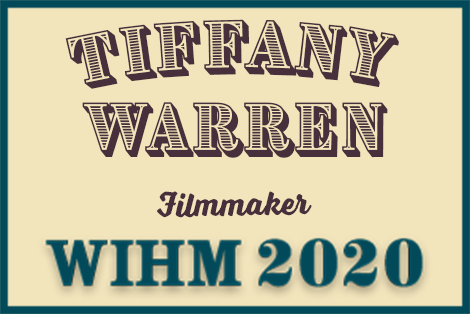 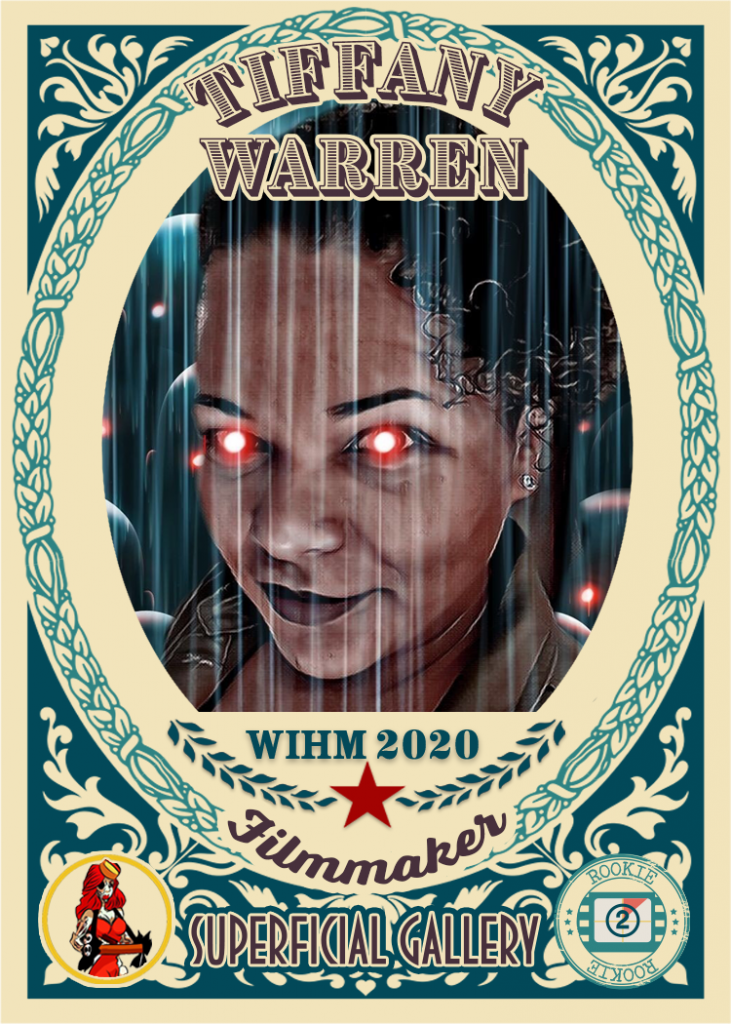 Tiffany Warren is a rookie to the Gallery WIHM event. She is a Filmmaker.

I love telling stories and creating worlds! I have an overactive imagination, so it’s always fun to bring to life the “what happens if” scenarios that dance around in my head.

That’s really a hard question for me to answer, because I know so many great women who “do what I do”, and more, so I can’t limit it to one! Lucy Cruell, England Simpson is a queen of badassery, I can’t wait to see Fat Henry! Gigi Saul Guerrero, Tonjia Atomic, as well as Jill Sixx.

I do have to say though, a huge part of my heart lies with two women who created a network of support as well as festivals like Etheria Film Night, even produced a film to promote the works of women; they are Heidi Honeycutt and Stacy Pippi. Both have such a love of film that’s diverse, and they continually provide outlets for those works.

Vanessa Ionta Wright is another woman I greatly admire for providing an outlet for women in horror with the Women in Horror Film Festival. She’s a super talented director as well and genuinely, a kind person. Lou Símon and Comika Hartford are also wonderfully talented and supportive filmmakers. I’m fortunate to have had the opportunity to know these women and look forward to working with them in the future.

For all the success and opportunities that they can take!

Don’t minimize yourself for anyone. You can mute yourself, cater to people, and it still won’t be enough. Work hard on your craft and find your tribe. That way, you have a support system you can trust.

I’ve been at this since 2003. Most of my films up to last year (2019) look like amature, “student films”* I don’t consider myself a failure because I refuse to quit. So long as you keep at it, you’re not a failure… each time you feel you miss your goal, reevaluate it and try to think of smaller steps to get you closer to it. If you’re struggling to get a whole production off the ground, write. Write often, develop your writing skills and enter as many competitions as you can because that alone could take you somewhere, or at the very least, get you to meet people you can work with to help reach each other’s goals. Not into writing? No problem, Facebook groups are actually a pretty useful resource for finding film work. You may not always have the best experiences, or end up on a “huge” production, but it’s experience you can learn from and even get inspiration from. But bottomline? Don’t ever give up, take breaks and reevaluate, but don’t quit.

*yes, I know not all student films are bad, but they have a reputation for being fairly unpolished, at least back in my day before digital cinema cameras and led lights 😉

I’m about to start production on my short film Din Din with Claude, which is about two best friends that find themselves in trouble when they discover a magical land in their pantry and one of them has the mad munchies.

I’ll also be acting in another short film with my buddy Andrew Shearer of Gonzoriffic while I’m in Atlanta for the Days of the Dead Convention & Reels of the Dead Film Festival. After we wrap production on Din Din with Claude, I start pre-production on my first feature currently titled Goat Man’s Bridge, based of the north Texas legend of the same name.

Then, throughout the year I’ll be working on writing and developing a television series with my friend and film partner Rebecca Santos, as well as helping other filmmakers on some of their upcoming projects, but my roles on there have yet to be determined.