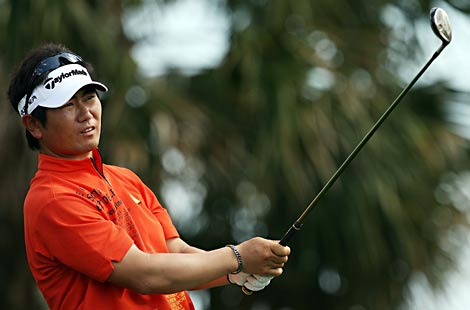 Tiger Woods lost the PGA Championship this weekend. This is of note because Tiger led after three rounds. Tiger is rarely caught, but some dude from Korea got after him on Sunday. The shot Y.E. Yang hit on 18 was awesome. I’m a Tiger fan. I’ll admit that, even when it seems to be the cool thing to root against the guy. Tiger is not the Yankees, he’s just one dude busting his ass, not an Evil Empire. So, yeah, I root for him. When Tiger is not in a tournament or playing badly, you don’t know what you’re getting from the winner.

But, when Tiger is at the top and playing solid golf, and someone is rolling with him? Yeah, you’re getting good golf down to the wire. It’s dramatic, and that is what unfolded yesterday afternoon.

Tiger faltering may be the biggest story to come from yesterday, but the bottom line is that we need more of this. Not Tiger dominating or fucking up. Something in between.