December 5, 1933: Prohibition is repealed with the passage of the Twenty-first Amendment 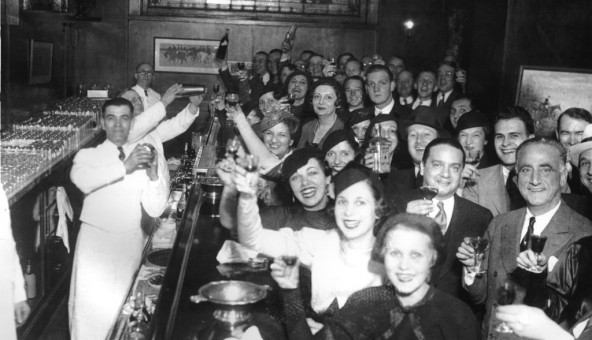 On this day in history in 1933, the Twenty-first Amendment to the US Constitution was passed, effectively ending a nation-wide 14 year  ban on the manufacture, sale and transportation of alcohol. In the 1910’s, national Prohibition had been touted as a social cure-all, saving tax dollars spent on social issues by dramatically reducing crime, poverty, and alcohol-related violence.  This concept was so whole-heartedly embraced that  some towns sold their jails as Prohibition went into effect in 1920. In reality, of course, Prohibition was a spectacular failure on every level, as the country took to illegal production and consumption of hooch with gusto. Al Capone alone is estimated to have made $60,000,000 in 1927 on alcohol sales, with 30,000 speakeasies operating just in New York City during the period. Lost tax revenue from the sale of liquor (as high as $12 billion dollars) and enforcement costs (estimated at $12 billion dollars), coupled with the fear or national moral corruption (again!) spelled the end of national Prohibition in 1933. However, it took another three decades before all state-wide Prohibition laws were repealed  ending with Mississippi in 1966. Today, cocktail snobs and hipsters throw Repeal Day parties on December 5th, serving alcoholic beverages beginning at 9:00pm (the 21st hour).    So put on your best fedora and suspenders and go get blind drunk on whiskey tonight.  It’s not socially irresponsible. It’s history.

Filed under: Today in History, trivia