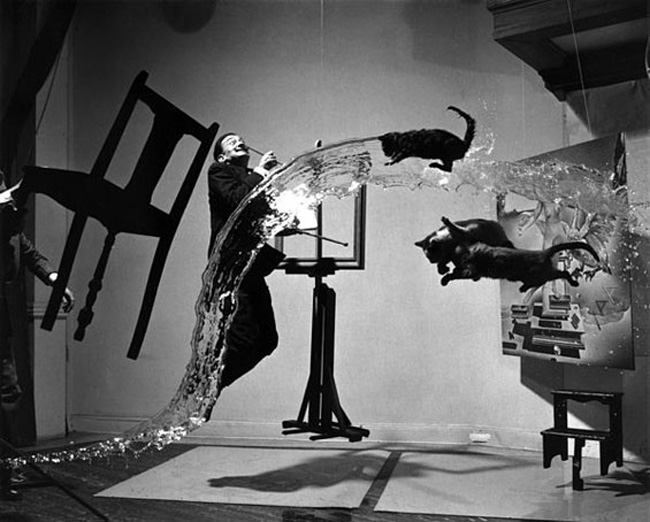 On this day in history, legendary Surrealist artist Salvador Dalí died, leaving behind a legacy of painting, sculptures, photography, and general wackiness, setting the bar for weirdos around the world. Best known for his dreamy paintings that decorate dorm rooms everywhere, Dalí also made headlines in his day for all manner of attention-grabbing public antics and eccentricities. George Orwell wrote, “One ought to be able to hold in one’s head simultaneously the two facts that Dalí is a good draughtsman and a disgusting human being.”  In honor of the death of the 20th century’s leading oddball, here’s 12 things you didn’t know about Salvador Dalí.

1. Appeared on The Tonight Show with a leather rhinoceros and refused to sit on anything else.

2. Born nine months after the death of his brother (also named Salvador) and was told from childhood that he was his brother’s reincarnation.

4. Accused of starting an unrest at his art academy and was expelled in 1926.

5. Attended a masquerade party with his wife dressed as the Lindbergh baby and his kidnapper.

7. Upon getting kicked out of his Surrealist group, remarked “I myself am surrealism.”

8. Rumored to have a phobia of female genitalia as a young man.

9. Delivered a lecture wearing a deep-sea diving suit and helmet, carrying a billiard cue, and leading a pair of Russian wolfhounds.

11. Used a glass floor to study foreshortening, creating dreamlike perspectives in his paintings.

12. Avoided paying tabs by drawing on his checks, assuming proprietors would find more value in keeping the checks as art than cashing them.