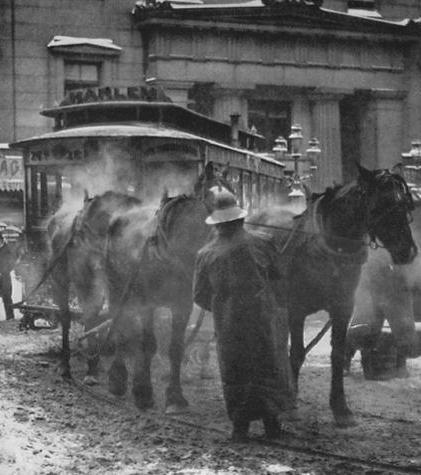 180 years before Hurricane Sandy flooded the subways with 45 million gallons of water, the first streetcar went into operation in New York City. Think about that for a second: a 30-seat horse-drawn car with steel wheels, riding along steel rails, clip-clopping down the streets of New York. Passengers would pull on a leather strap attached to the driver’s ankle when they wanted to get off (I shan’t speculate what the driver pulled on when he wanted to get off).

Other forms of transportation gradually replaced horse-drawn public transit, including New York City’s first elevated train in 1870 and the official subway system in 1904. By the end of the Roaring 20’s, horsecars were a thing of the past on the streets of Gotham. In honor of today’s day in history, take a peek below at 100 years of the Big Apple, 1830-1930.