I know what you’re thinking. Maitland, why are you covering the TONY Awards, I mean, look at all of that lameness in the picture you have below. There is a huge but coming after that lameness, however… 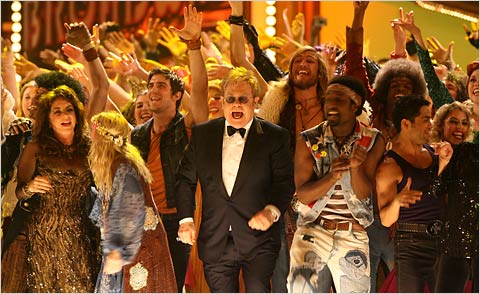 I don't want to just call all these dudes gay, but I mean, aren't my options limited?

But, I went to the wrong Tony Awards. Thankfully for the Gallery, when I’m wrong I’m still right.

And when I’m wrong, I usually find myself in a seedy bar somewhere off the Jersey Turnpike. Just the way life works out sometimes.

Northeast Kennel Club Presents: The 2009 TONY Awards. I asked the guy at the door who took my 5 for a cover if this Kennel club was the one that had the Westminster Dog show each year. He told me no, then pulled out an index card and read a lame joke about how the Kennel is a reference to their wives. I did not laugh, but I’d be laughing in spades later.

I’ve got some transcripts of the winning speeches, those will be in italics. They tend to go long at award shows of this stature so these are mainly excerpts.

The 2009 Tony for Billiards Excellence: Tony B from the B
Yo, thank you. Tony B from the B here. B from that Bergen, you know that, though, because you’ve seen me in the bars working the felt, putting the english on it. Yo. So, most folks when they see me in the bar, they first go, what’s he doing bringing his own stick? Yo, so I can bang the cue proper like. What’s he doing with his I Tune headphones still on? Yo, I’m listening to my tunes so I can crush you. What’s he doing not even drinking a brew? Yo, I like to imbibe, just not when I’m working you over y’know? So, yo, there it is.


The 2009 Tony for Song Performance goes to: Little Ant’ny

Little Anthony was not little. He labored to a podium that was more just a high stool with a microphone resting on it in between award announcements.

Wow, thank you. I could not have this honor without Rahway Premium Sound spinning the classics that night. A lot of folks are feeling it when the Bon Jovi hits, but what I did that night in taking it to the limit with Livin’ on a Prayer to just straight up killing it with Friends in Low Places. That was like a perfect storm of catastrophic musical awesomeness and just a wave that I had to ride. Thank You!

The 2009 Tony for Softball Mashing: Tony!

Yo, hey now. Ya’ll are lucky I done came to this here gala. Popped straight up from the gym to take my fifteen minutes and collect the Tony. But, seriously, I don’t have time for this because I’m like the award says, mashing. Raking. Whatever you want to call it, what it amounts to is Tony crushing on a pitcher who doesn’t know what is good for him. And what is good for him ain’t pitching to Tony, you know what I’m saying? You might be thinking, hey now, here’s Tony, he doesn’t have any sleeves on. Yeah. That’s right.

You are seeing the guns here right now, am I right?

Seen them. Folks, they were out, but he gets out gunned later.

Hey, you know, I’m not Tony Bennett. Just Tony. Mr. Bennett couldn’t make it out to the club tonight. He’s at home in Queens just relaxing. He called, said he would love to make it, but you know, had an Iced Tea to drink. So, I says, OK, Mr. Bennett, we’re still giving you the award, give it to you every year.

They seriously just played Funky Cold Medina and Wild Thing right now. This seemed like an intermission. I am basing that only on the song selections coupled with everyone rushing towards the hot wings at the back of the room. I, on the other hand, found a jersey girl to say, I need $50 to make you holler, I gets paid to do the wild thing.

Some folks ask me how I do it. Well, first, I stick the needle in my ass. Actually I have my buddy Robbie stick me in the ass I am terrified of needles. Then like, I get another cycle every couple of weeks and just straight keep adding muscle…you know, ya’ll know how steroids work by now, it’s just a matter of commitment to excellence and performance. You got to mix cycles and mix cocktails and then you’ll look like me Tony T.

This guy, well, here’s his speech:

Then he did this for like an hour. I was wondering if at any point the hold on his hair would come loose, but those spikes are no joke. He was just leaping and yelling in exuberance for an hour and the hair was porcupine perfect the entire time. I wondered if anyone would stop him, but they didn’t.

I heard a couple of people comment about how his tan was looking great, here is that dialogue:

Person A: Damn he is looking great! Young Tony!
Person B: Absolutely. Looks just like a clementine up there.
Person A: Oh, good call. Sometimes an orange is straight up too in your face, but yes, that clementine look is what everyone will be dancing with down at the shore this summer.
Person B: I hear that!

And then I think the show ended, but I’m not really sure. There were a couple fights, as expected, won’t even waste your time talking about those.